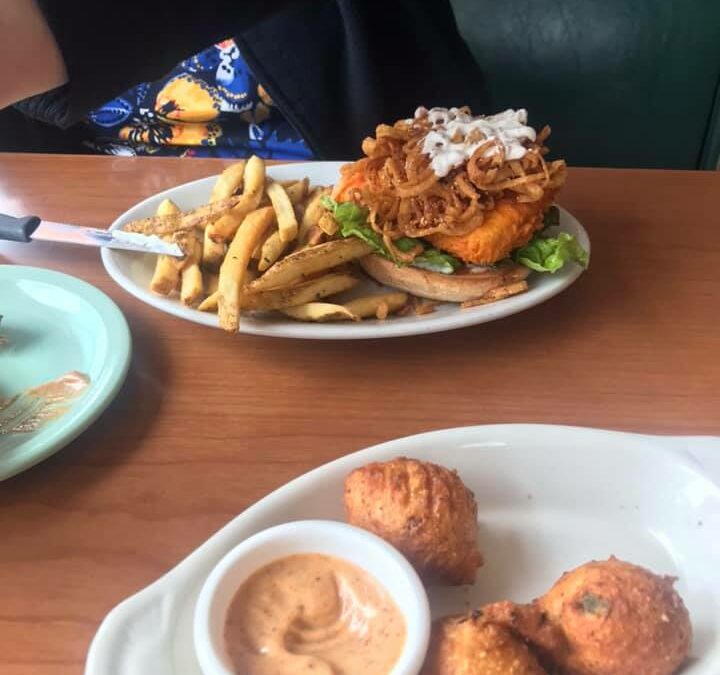 Gene recently had a meeting in Portland and I took the opportunity to contact a friend and meet for lunch. We decided to try out a Vegan restaurant (yes, on purpose!) that had great reviews. (If you don’t believe me, check out the Cornbread Café in Eugene, OR.  And I should mention that it was standing room only!) This isn’t the first time I have had a vegan meal, nor will it be the last time. But it was my first visit to an all-vegan restaurant.

I will admit to being curious about some of the items on the menu. I had to pull out Dr. Google to find out what some of the ingredients were: seitan, tempeh, and I don’t want to know what “uncheese” is. I went with what I knew and ordered the cheesy jalapeño hush puppies which were fabulous. And I really enjoyed my Southern-fried Buffalo Tofu sandwich.
Several months ago, I was in LAX airport when someone called out my name. I looked up and there stood Thresia Haugen, who I hadn’t seen in nearly ten years. I was so surprised that I didn’t even think to take a photo. I promised to look her up the next time we were in Oregon. Fortunately, we were able to find a time to meet for lunch.

The drive from Portland to Eugene is about two hours and has some beautiful scenery, which I very much enjoyed on the drive down. I tuned the radio to an oldies station (Has anyone noticed that they play 70’s music on the oldies station now?) as I drove down the valley with views of the Cascade Mountains. I also notice how polite the drivers were and how everyone seemed to follow the speed limit.

Thresia, and I had such a nice time catching up with our lives and chatting over lunch. It was worth the two hour drive to take the time to meet up with someone who has impacted my life. We stay connected through Facebook, but there is nothing like a long lunch with a friend. We talked about our children, our spouses, our grandchildren, the AMA Alliance (how we met), and our hopes and dreams. It was hard to say goodbye, but Thresia dreams of running a marathon in every state and I have offered our home as a base (note: I did not offer to run the marathon with her!) if she is ever in Iowa.

So on a rainy Friday afternoon, I turn north for my drive to Portland and someone has replaced the nice, courteous Oregon drivers with NASCAR drivers. I kid you not, I was starting to suspect something horrible happened in California and there was a mass exodus heading to Washington State, and I was on the main evacuation route. It was crazy traffic and I found my competitive streak coming out before I heard Gene’s voice in my head, “better to get there safe than get there first.” As it turns out, once I hit the city limits of Portland, traffic came to a halt and I was saved more by practicality than common sense. All in all, a great day. 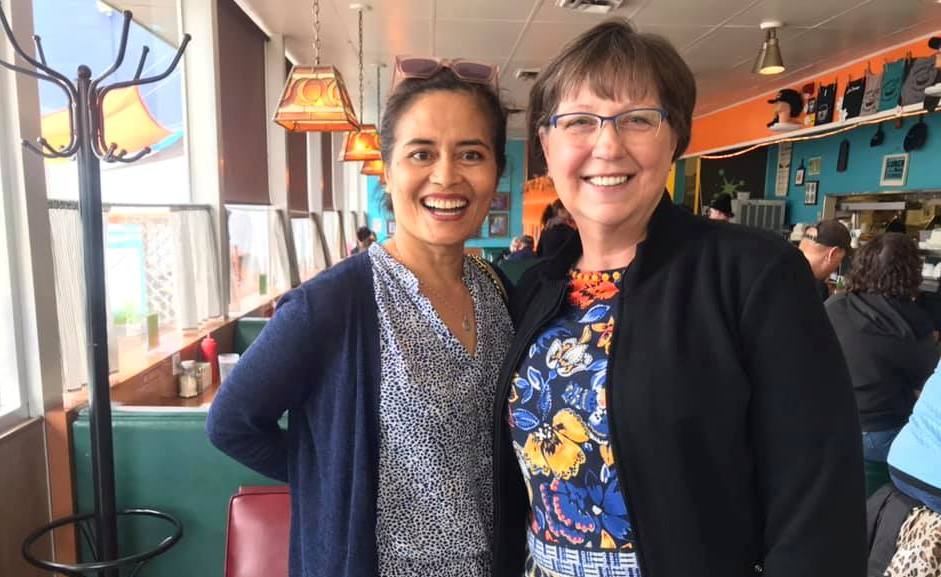