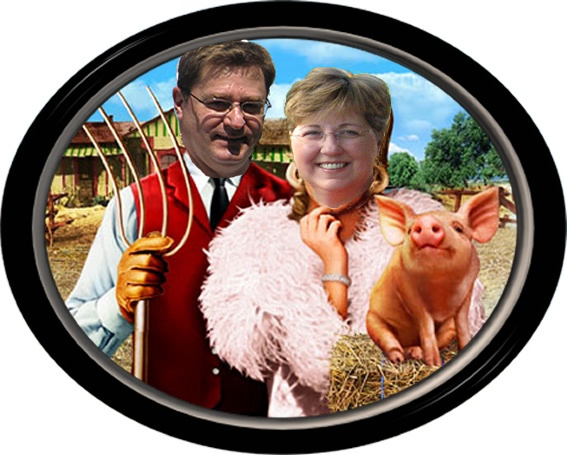 It is hard to imagine that we have lived in rural Iowa for over ten years now, and I’m happy to report that we are both still alive and facing each new challenge with a laugh and our trusty Kubota. My stories about our adventures have received so many comparisons to the old T.V. show Green Acres that I was determined to take a similar photo for our holiday letter. Unfortunately, it is a lot harder to borrow a pig than you would think. So I had to use my PhotoShop skills to create my own version.

For those of you who missed this 1960’s sit com, this series featured a successful New York lawyer who gives up the rat race to fulfill his dream: living the life of the traditional American farmer. Fighting the move to rural life is his glamorous, boa-wearing, city-loving wife. While I didn’t grow up in a large metropolitan area, it would be fair to say that I moved to the country with some reluctance. After several months of absurd adventures, I decided to start a blog to share these adventures with others.

These ten years have been filled with adventures and misadventures as we continue to adapt to country living. As I look back and remember our attempts to tame nature, bouts of poison ivy, bon fires, grass fires (oops!), tree trimming, tree falling (oops!), tree not falling (strong expletive!), cutting grass and removing snow, I am amazed that we have escaped serious injury. Dealing with the moles, chipmunks, raccoons, deer, and a yard filled with wildlife that would rival any Disney movie has become a science experiment involving chemicals, weapons and my trusty camera. (If you can’t shoot it, shoot a photo of it!)

Over ten years, some things have become easier, while other remain challenging. I have gotten used to neighbors lighting fires on windy days, and animals feasting on my garden. And I no longer drop to the ground when I hear shots fired. (In my defense, in the movies, the people who drop to the ground when they hear shots fired live, while those who remain standing while pointing and laughing usually get shot first. I’m just saying.) Who knows what the future may bring, but I can say life has not been dull.