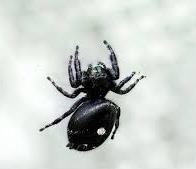 After a beautiful yesterday morning, we stopped at the end of the driveway to pick up the mail and paper. Gene Lariviere got out, gathered the mail, opened the door of the truck and handed me the mail and got in and closed the door. I unfolded the mail in hopes that I had won Publisher’s Clearing House and a giant, black spider with a big white spot on it’s back was nestled in the fold of the mail. I’m talking a fat spider as big as a nickel . . . AND it was moving. I gasp and screamed, “Black widow spider,” and tossed the mail to Gene. He fumbled with the mail, while trying to open the door to the truck. Papers and words were flying, and some of the word combinations were very creative. I’m sure the people passing by wondered what the commotion was inside our vehicle.

Gene finally got his door open and launched the mail and paper out. He jumped out and starts stomping on everything. Meanwhile, I’m yelling, “Where is it? Where is it? Did you get it?” and I’m crawling over the console to inspect his seat and the floorboard for any sign of arachnids or spider babies or spider cousins. Our nice peaceful morning has just been shot with adrenaline and I can feel my arms tingling and heart racing like I’ve been in a marathon.

As Gene gathers up the mail and paper, I swear I see small beads of sweat on his brow, and suddenly, I start laughing. The image of me tossing the mail and spider at him, and him trying to juggle the mail and open his door just cracks me up. Followed by me crawling all over the cab of the pickup squealing is just hilarious. And I have no idea why I yelled, “Black Widow Spider!!!!” when really, “Spider!!!!!” would do. We spent the time driving to the house discussing spider mitigation.

For those of you who have read to this point and can correctly identify the type of spider. Don’t feel compelled to comment on whether it is poisonous or not. Because if that spider had bitten me, it wouldn’t have mattered if it was poisonous. I would have died on the spot . . . AFTER taking a photo of it so Gene could prove it to insurance and the law. (Isn’t it weird that I even thought of the law?)