On Saturday, Gene asked me if I would like to go someplace new to walk, to which I replied, “You bet!” I’m always up for an adventure or the opportunity to explore some place new. I quickly made a sketchy hotel reservation (pickings were slim as it was suppose to be peak leaf viewing season, so I took what I could get) and we set out for Effigy Mounds in Northeastern Iowa along the Mississippi River. The two hour drive gave me opportunity to read up on the park. 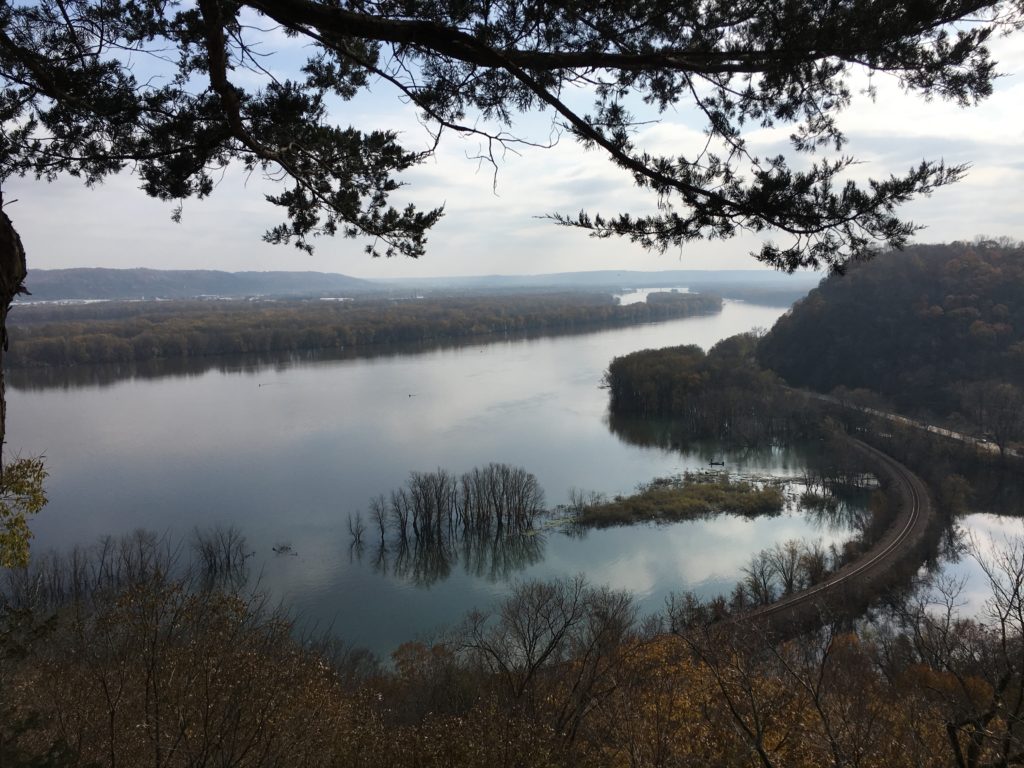 The park website description says: “Effigy mounds are raised piles of earth shaped like animals and other symbols, often used as burial grounds. This national monument preserves more than 200 such prehistoric mounds created by American Indians living in northeast Iowa’s Upper Mississippi River Valley. The park has 14 miles of hiking trails. .” They may have left out a few key facts. 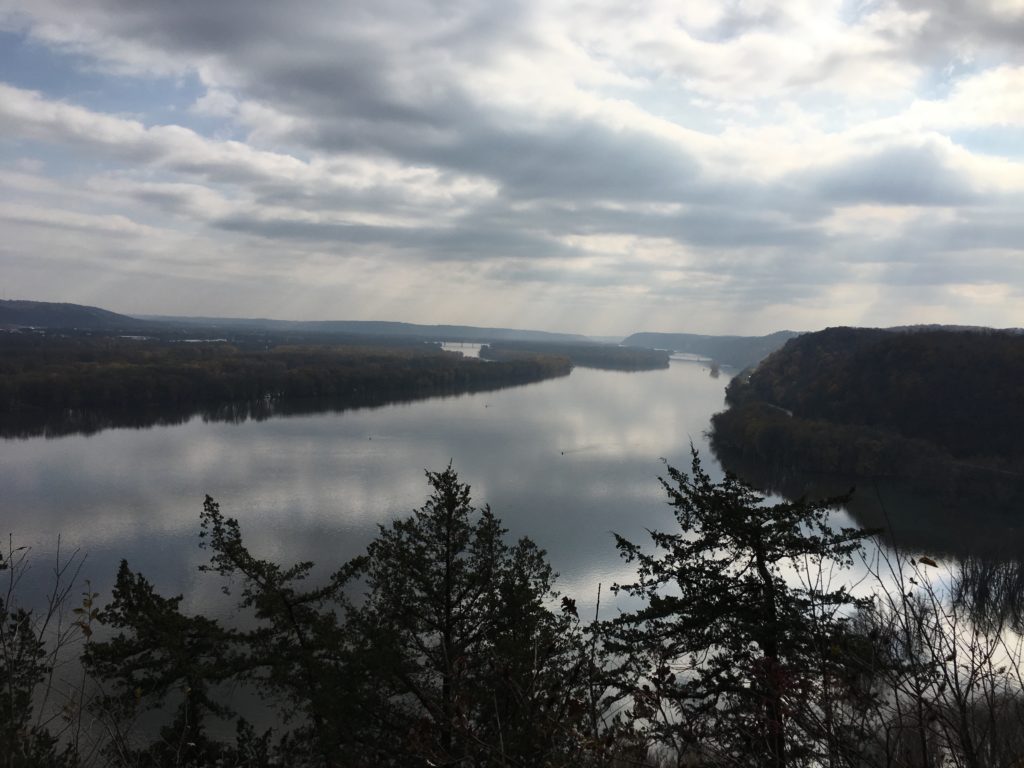 We arrived at the National Park Visitor Center and the park ranger asked if we were familiar with the mounds. “No, not a clue.” She gave us a brief history of the mounds and explained that it was a sacred area, so we should stick to the trail. Got it. Then she told us the trail was located outside the door and to the right. I looked out and saw a 300 foot bluff with what appeared to be a steep trail going straight up. “Where is the Bunny Slope?” I asked. She laughed and said, “It is only ¼ mile to the top (which should have reinforced my hesitation) and then it is an easy walk around the mounds and overlooks. “

I looked at Gene and he said, “Let’s go.” We start up the trail, which suddenly seems steeper than it looks from the visitor’s center and within five minutes, I hear loud wheezing and I can’t tell if it is coming from me or Gene. We stop and lean against a rock to catch our breath, pretending we are admiring the view. A couple passes us on their way down and they are smiling and seem to be enjoying themselves. So we take off again. As I get to a switchback, I look back and Gene is still with me, but also breathing hard. We take another rest and I look at my watch. Six minutes in, are you kidding me? Another couple passes us on the way down and they laugh when I ask, “Why does everyone heading down look so happy?”

At the halfway mark, there is a bench, thank GOD! I glare at my Fitbit. We recover our heart rates and keep climbing. I might be getting dizzy now. Another couple passes and says helpfully, “You’re almost there.” Sure we are. My Fitbit says otherwise. We eventually reach the top and Gene is hugging a tree while I pretend to be looking at leaves on the ground, hands on knees, gasping for air.

We spot a sign that says, “Scenic overlook, .2 miles.” I look at Gene and say, “I wonder if the Park Ranger who talked to us put that sign there?” We aren’t sure if it is encouraging or a warning. I will say that the ranger was a little overly optimistic on “it’s an easy walk once you reach the top.” She should have said “IF you reach the top.” 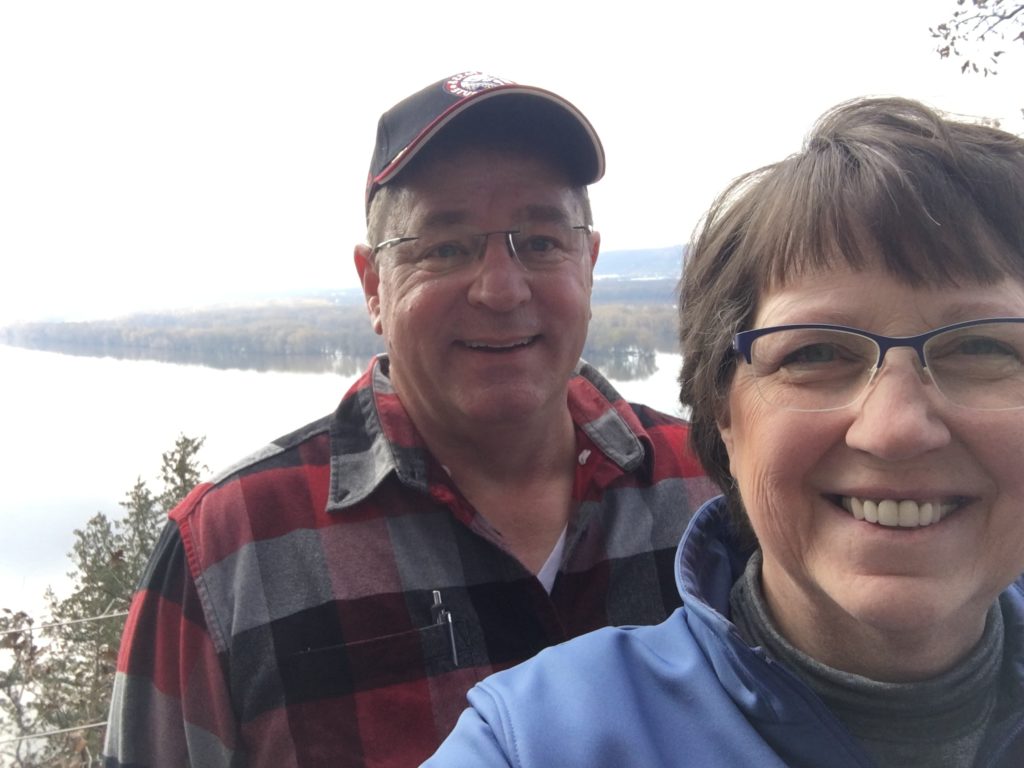 I will say that the views were amazing and we found the mounds to be very interesting. It is difficult to imagine ancient tribes working as a family or community to build these elaborate mounds with only hand tools. 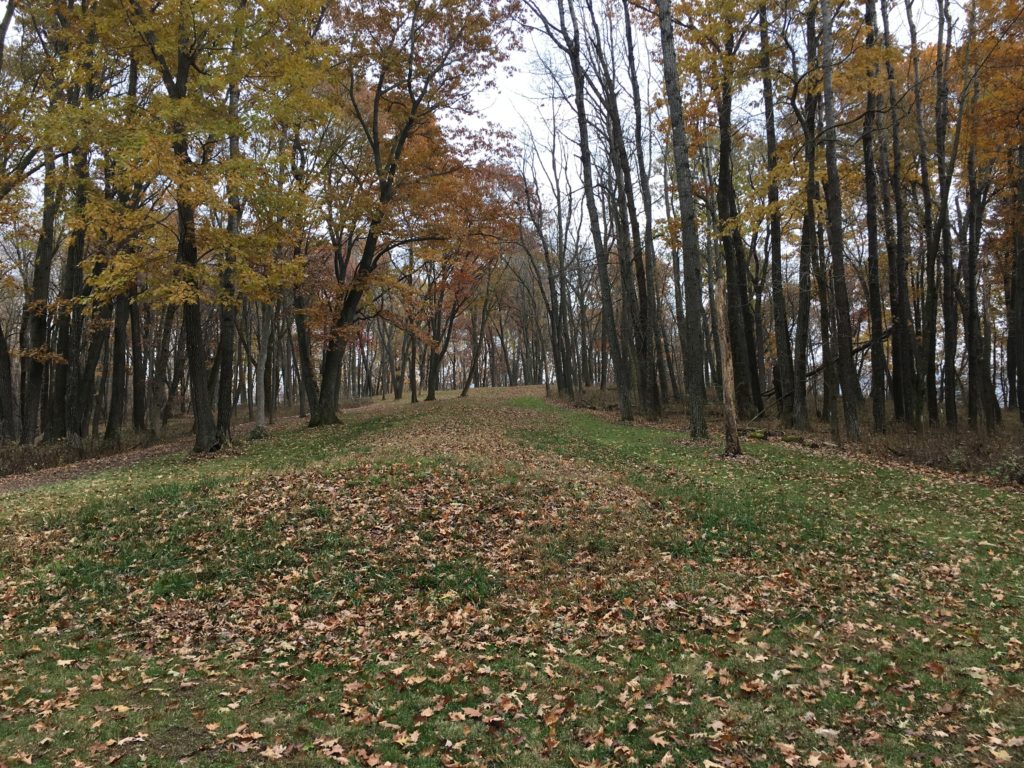 We enjoy the beautiful day and after 2.5 hours decide to face the descent. One would think that going down would be easy, but the slope was a killer. Gene walked in front of me so that if I started sliding, I could take him with me. As we passed people, I would state helpfully, “you are almost there!” To which several people said, “That’s what the last two couples said!” Too funny. 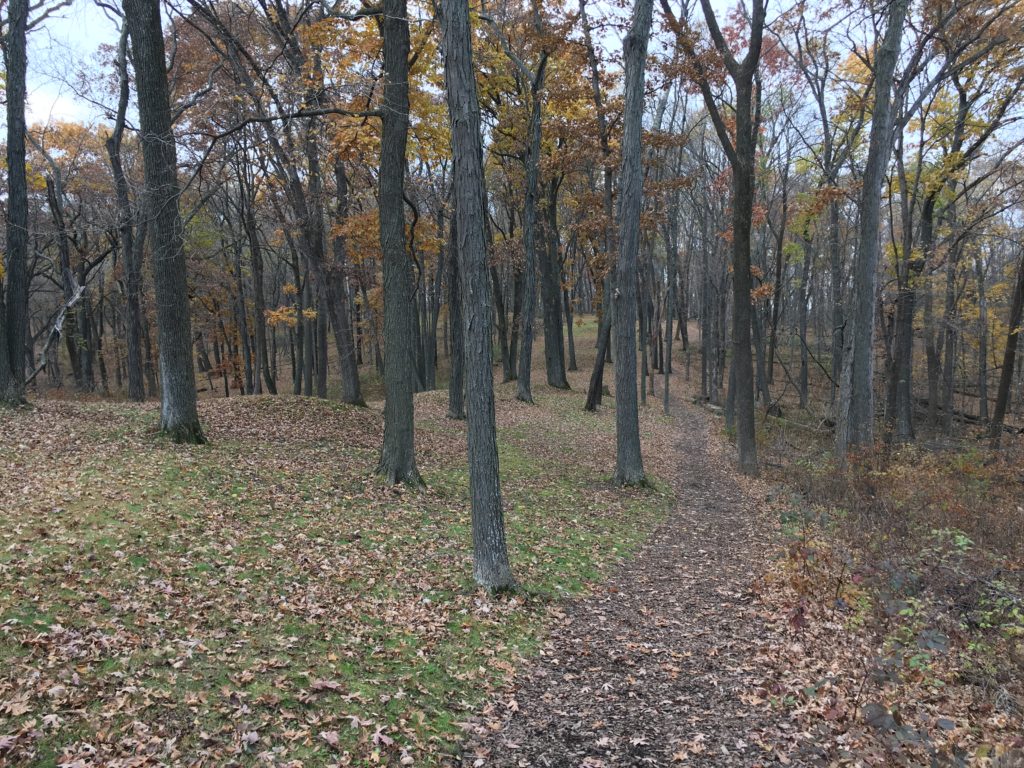 When we got to the car, Fitbit said we had walked 8.3 miles, the park signs said .6 (just kidding, we did the 3 mile loop) so maybe we were taking baby steps. Effigy Mounds is beautiful, but plan a day to explore, and take a tank of oxygen! Oh, and give my regards to the park ranger — evil woman!