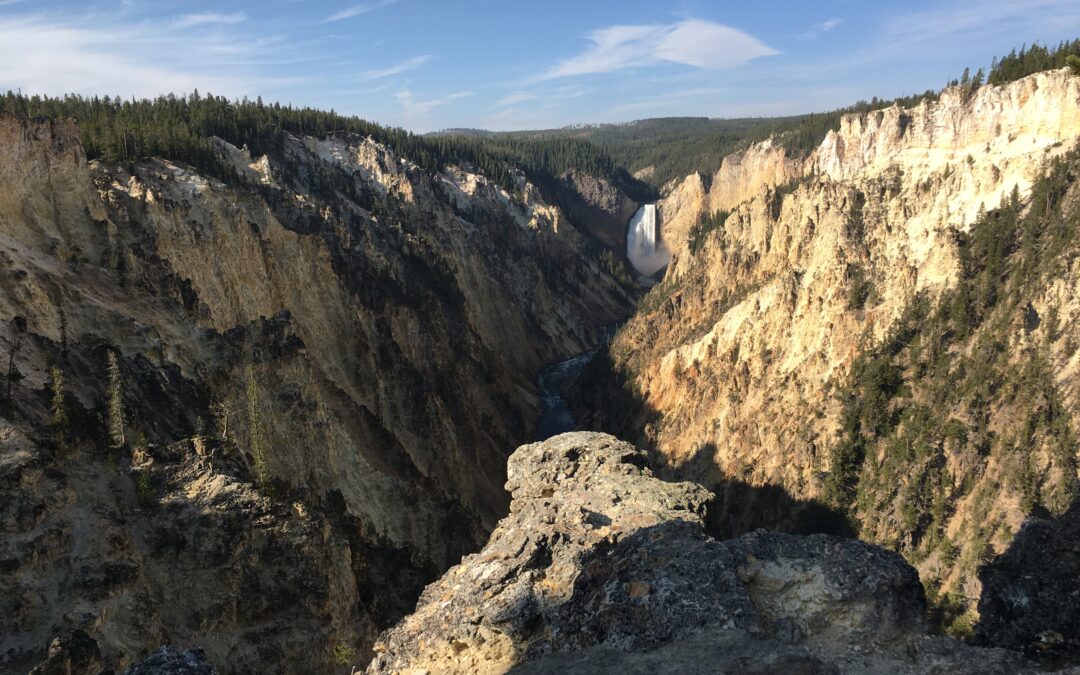 After our last night at the Dude Ranch and a hearty breakfast, we start our day with a plan.  We will go to Yellowstone when it opens and head straight to the bison herd and waterfalls before the crowds get big.  We know we have to run the “bear dinning gauntlet” again, but hope that the crowds will be smaller.  It turns out that bison’s commute to the other side of the road in the morning hours, so we got to stop in traffic while they crossed the main road.  There was a male Bison, a female bison and baby leisurely walking across the road a few cars in front of us and it was heartwarming.  I doubt that watching bison in the wild would ever get old.

It is official.  My phone is now about as useful as a rock.  The memory card is full and I don’t have internet or Wi-Fi to download or transfer some images, so I plan to use Gene’s cell phone if I can get it off his hip.  The bison were a great distraction, but I’m driving (only seems fair since Gene drove all day yesterday), and he is using his traditional camera to take photos.  I slip my hand out to hover over his phone and I get the look.  Seriously, I was not planning to use a phone while driving, we are parked ten cars deep while the bison cross the road (not a joke), so technically, I’m not driving.  But I gracefully give up my attempts to sneak out his phone (actually, I just plan to wait until later when he is distracted by the water falls and we are out of the car to grab his phone).

Shortly thereafter, the bison have cleared the road and we continue towards the traffic snarl in front of the bear sighting spot is.  We are on the North Loop, so we don’t have any options short of a four hour drive around the south loop.  Since the bear decided to sleep in, there wasn’t much to see but crowds of people waiting impatiently for the bear to appear.  I snickered as we passed all the photographers milling around and was tempted to remind them to look behind them as well as focusing on the bear’s elk dinner spot.  There might be more than one bear in those woods.

We headed to the water falls at the Grand Canyon of Yellowstone and they are truly amazing.  We got our photos, wearing masks since there were several people there, and walked the trails taking more photos and enjoying the beautiful weather.  There are so many varied terrains, sights, and opportunities within the park that you just have to pick a few and come back for another visit.  We saw more people wearing masks today. Gene has graciously offered to drive so I can take photos with his phone.

After the falls and hikes, we headed to a stream with picnic tables nearby to eat our cheese and crackers with Red Licorice Nibs for dessert (Don’t judge. It is what I had at the refrigerator at the Dude Ranch and there weren’t any stores around.) We learned our lesson the day before regarding the limited services  being open in the park due to Covid, so packing a light lunch to eat at a picnic area seemed to be a great idea. The spot we chose was beautiful and we watched people fishing in the stream. Everything was peaceful until the winds picked up and we were covered in pine needles and dust and debris.  About the same time, we heard a tree crashing nearby and decided that outdoor dining in 50 mph gusts was over rated.  We decided to head to the North Entrance and check out Mammoth Springs.  There were so many people there that we decided not to stop and drove through to Gardiner, Montana for the night.

Hello Montana!  Our 49th state to visit and our 49th state to experience construction delays.  Due to construction, crossing the state line was a bit anti climatic.  I have talked about Montana for years and we have had to delay the trip several times.  I wanted a band (WITH a tuba!) welcoming my arrival.  A construction worker did wave (I may have initiated the waving action), so I will take what I can get.  North Dakota, this is fair warning that I’m coming at you next fall!  That will be the last state in my list of 50 states to visit. I WANT A BAND AND A WELCOMING COMMITTEE!

My hotel selection for tonight is an independent inn outside of Gardiner about five miles.  It is a nice, family owned inn with 15 rooms and homemade breakfast (yes dear, it has a walk in shower and TWO chairs!).  Our room had amazing views of the Gallatlin mountain range and Devil’s Slide.  And the owners seemed to know Gene was coming as they had a write up in the room naming each of the mountain ranges and why they were named what they were named.  It saved me at least ten minutes of Googling! Gene dined on more trout while I got a bison burger.  We love Montana! 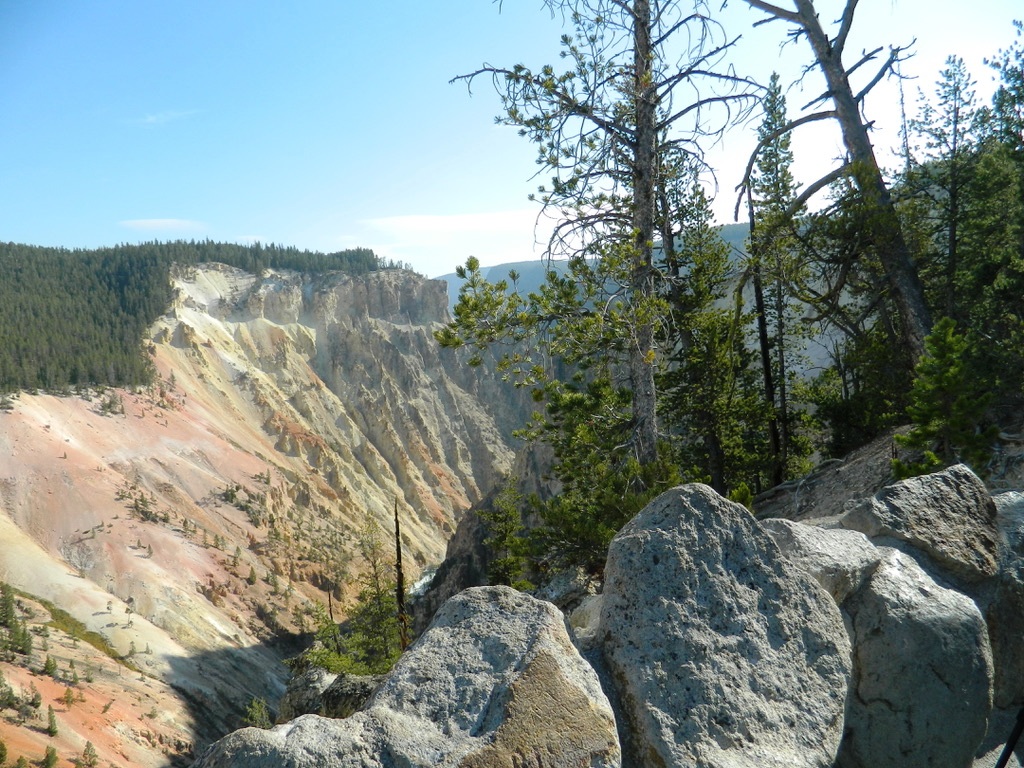 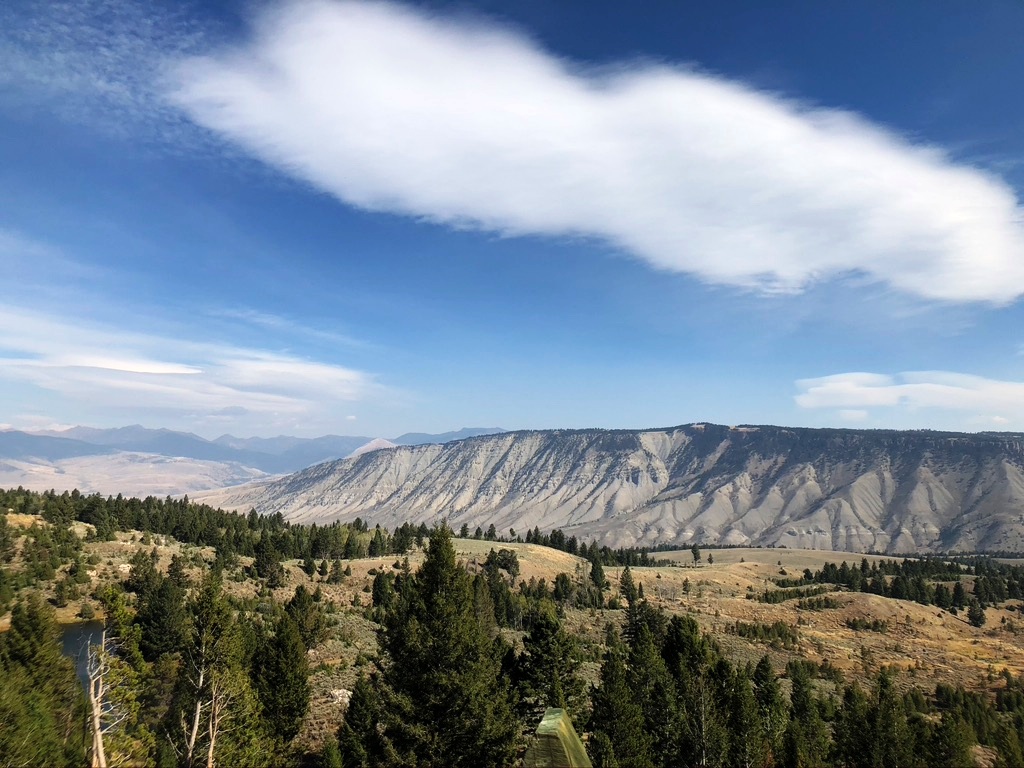 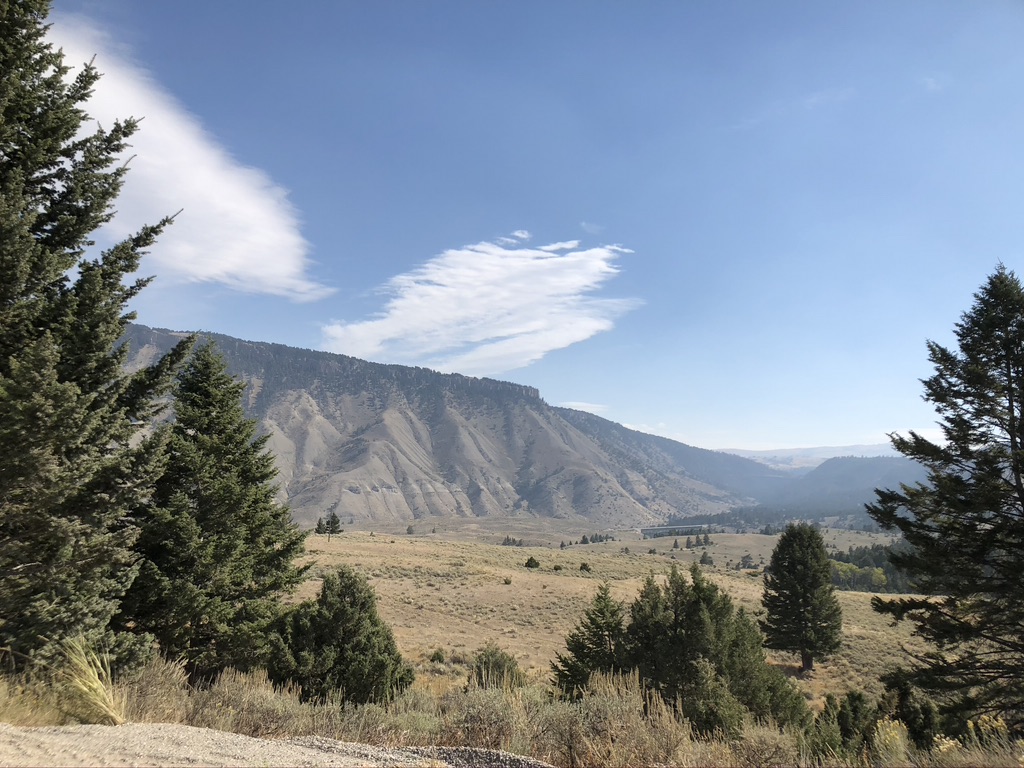 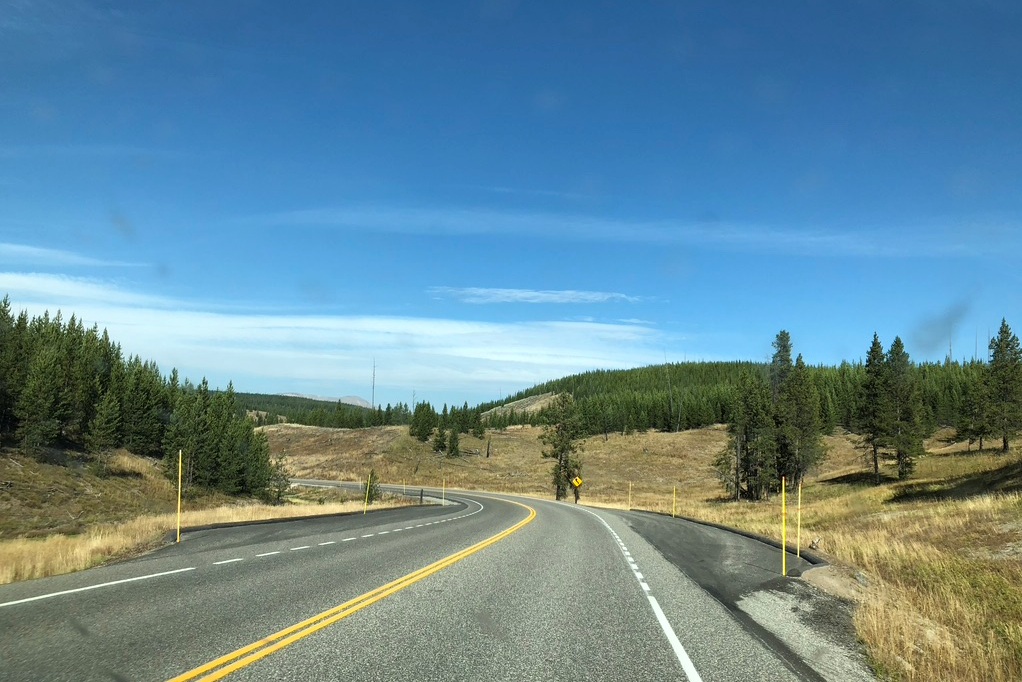 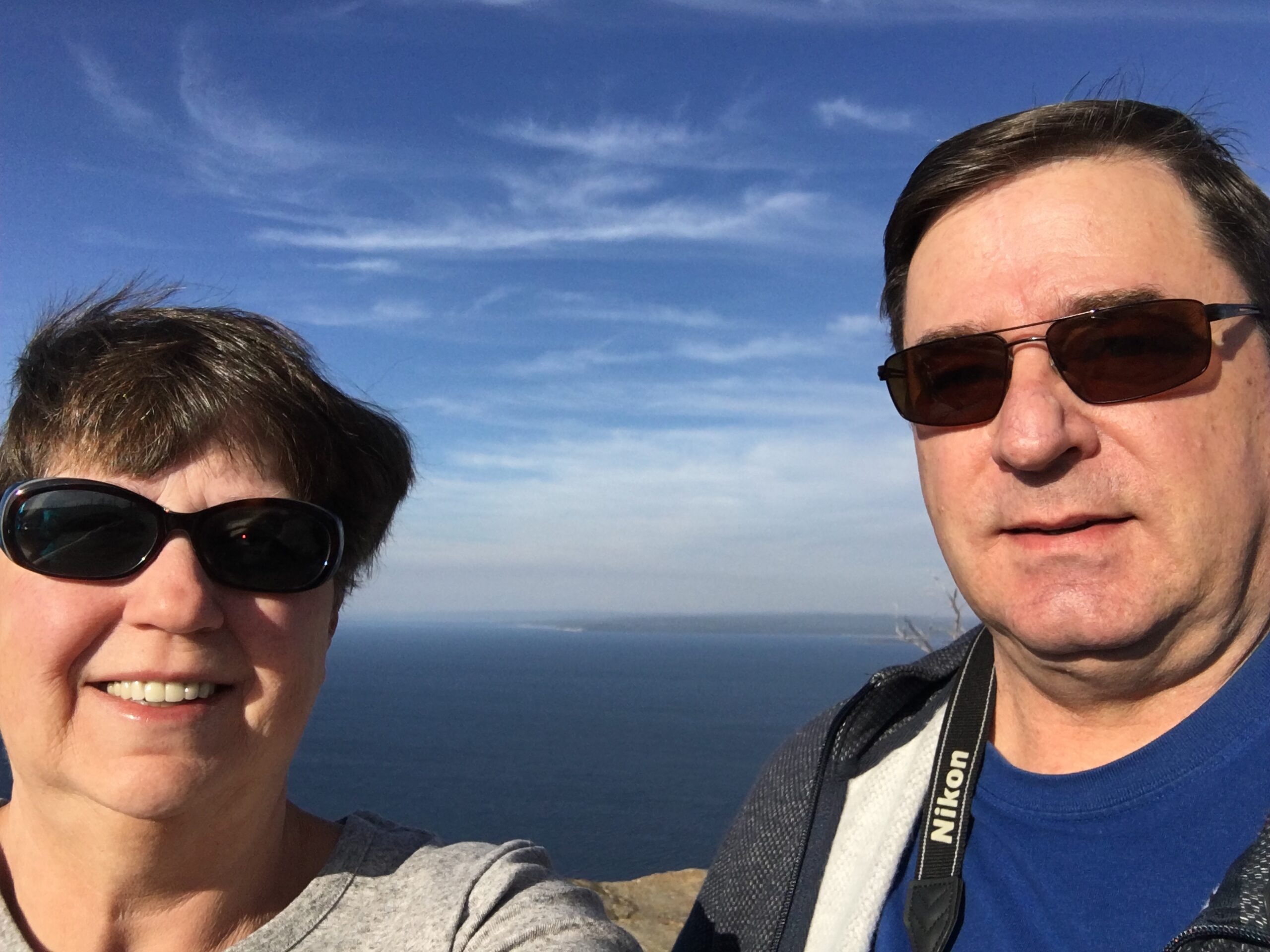 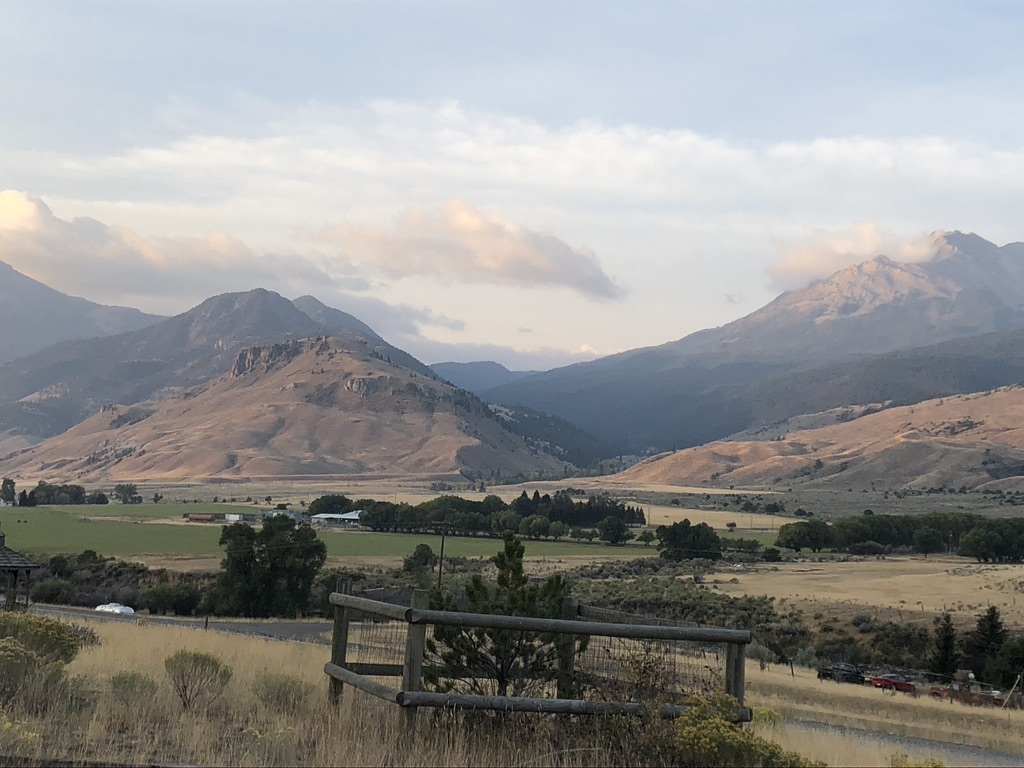 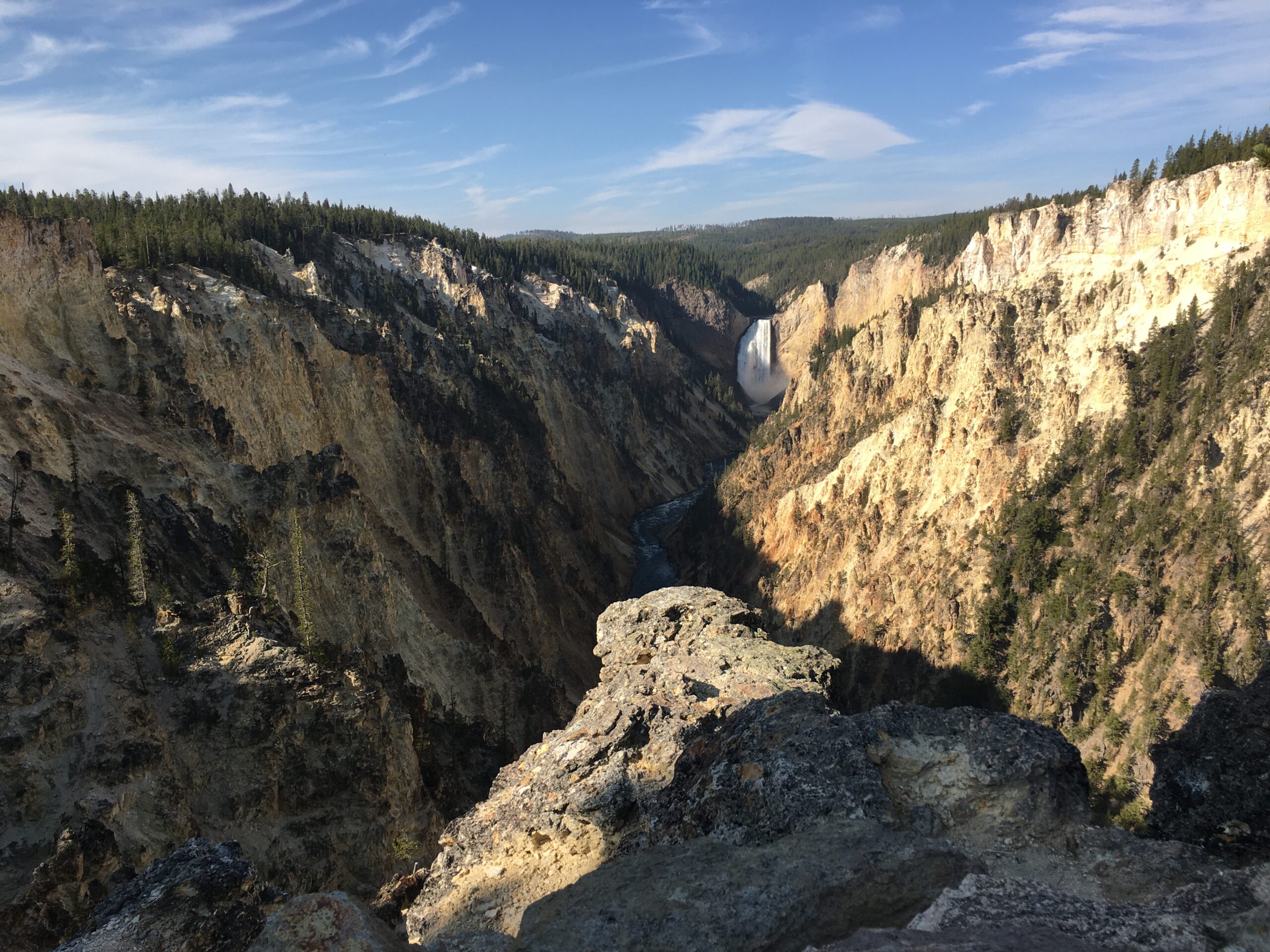 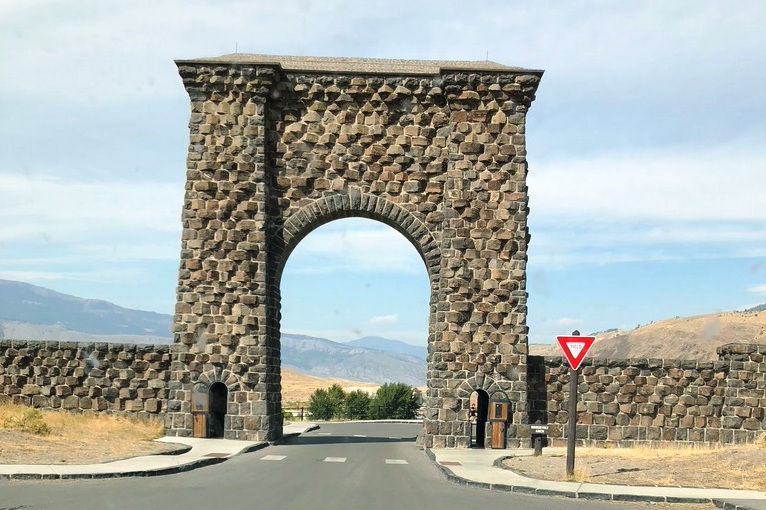 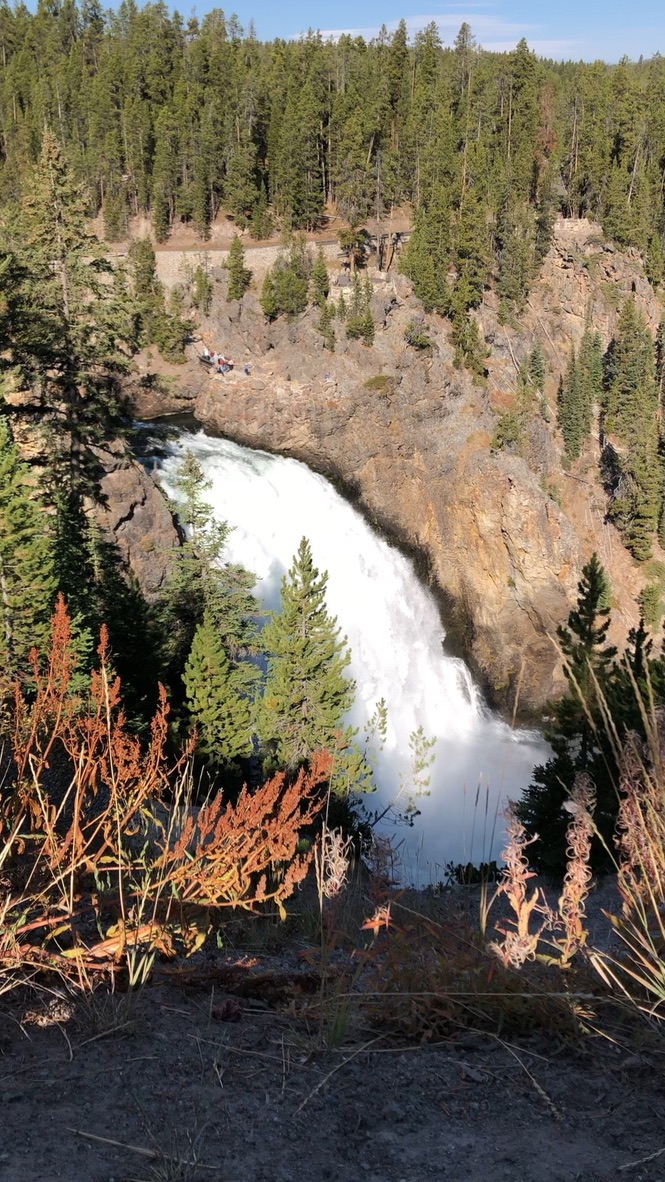 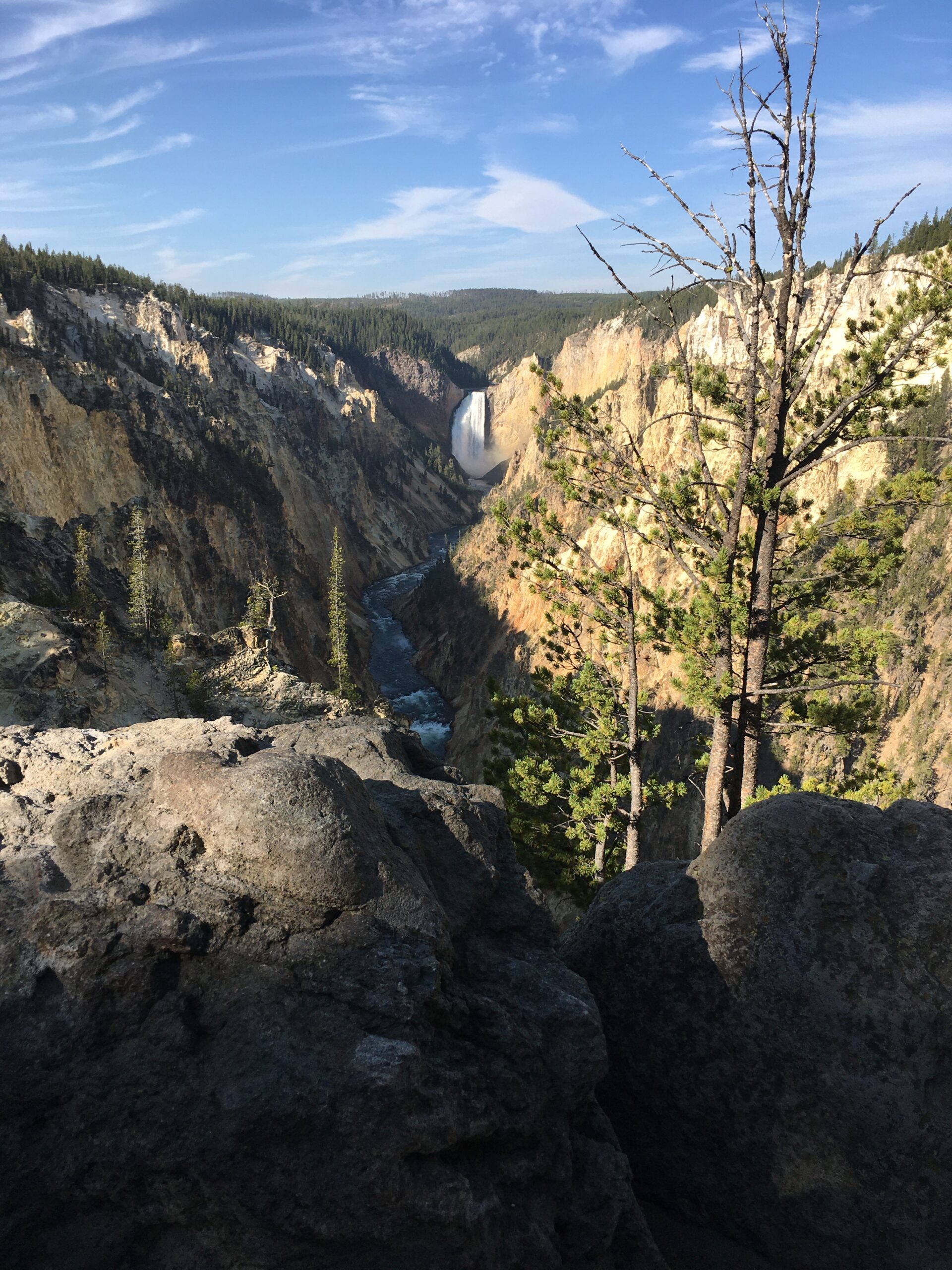 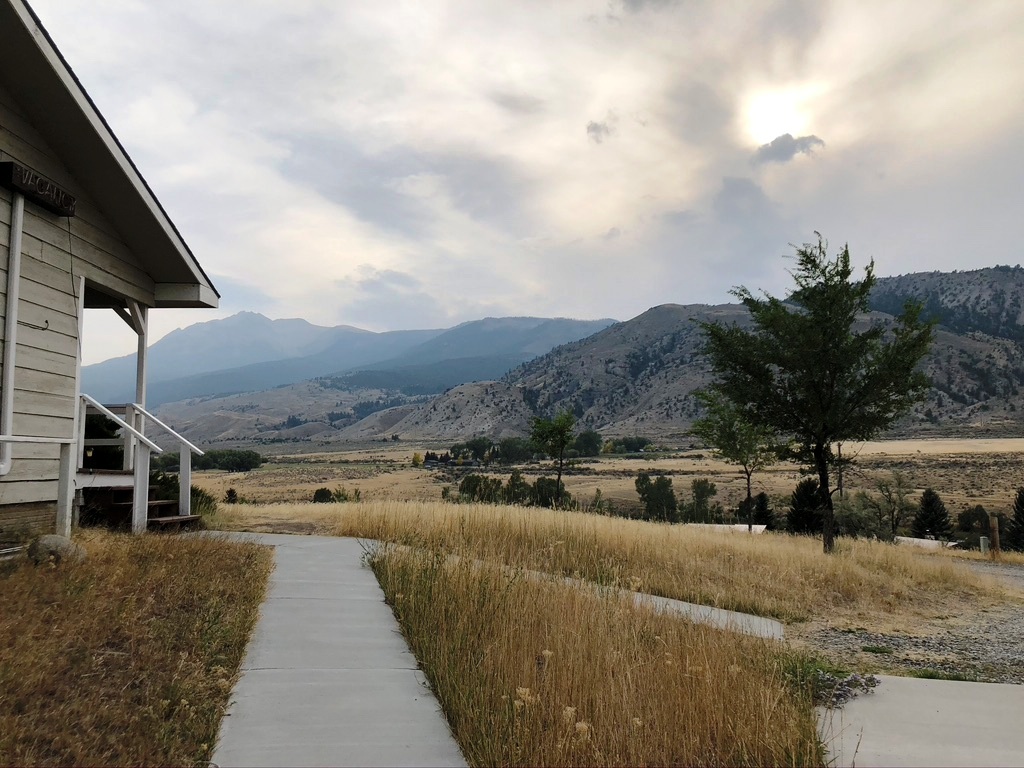 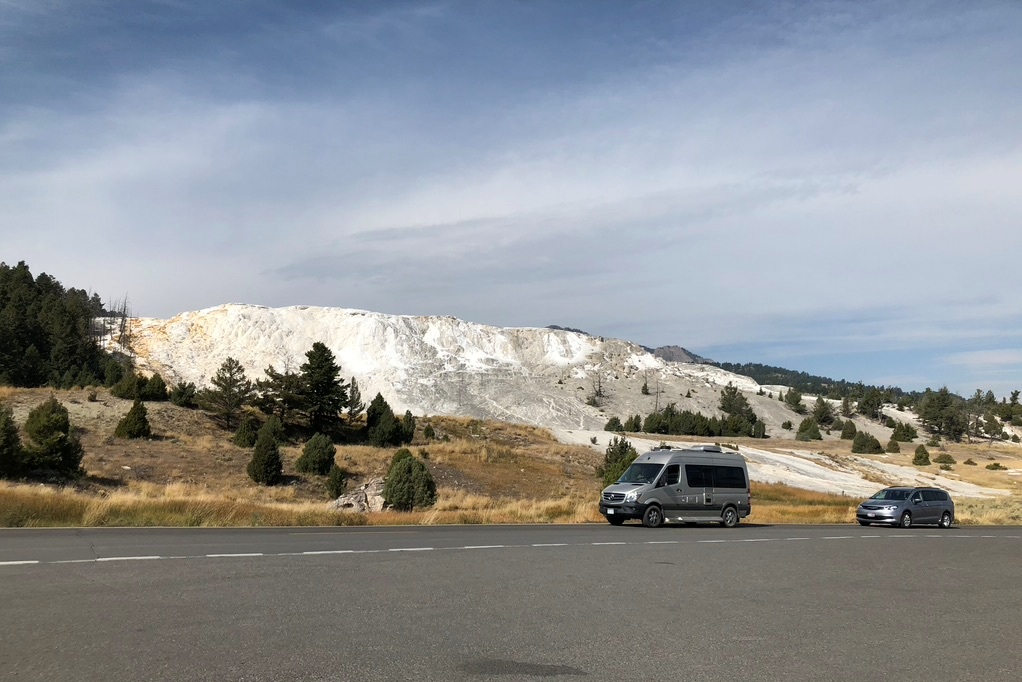 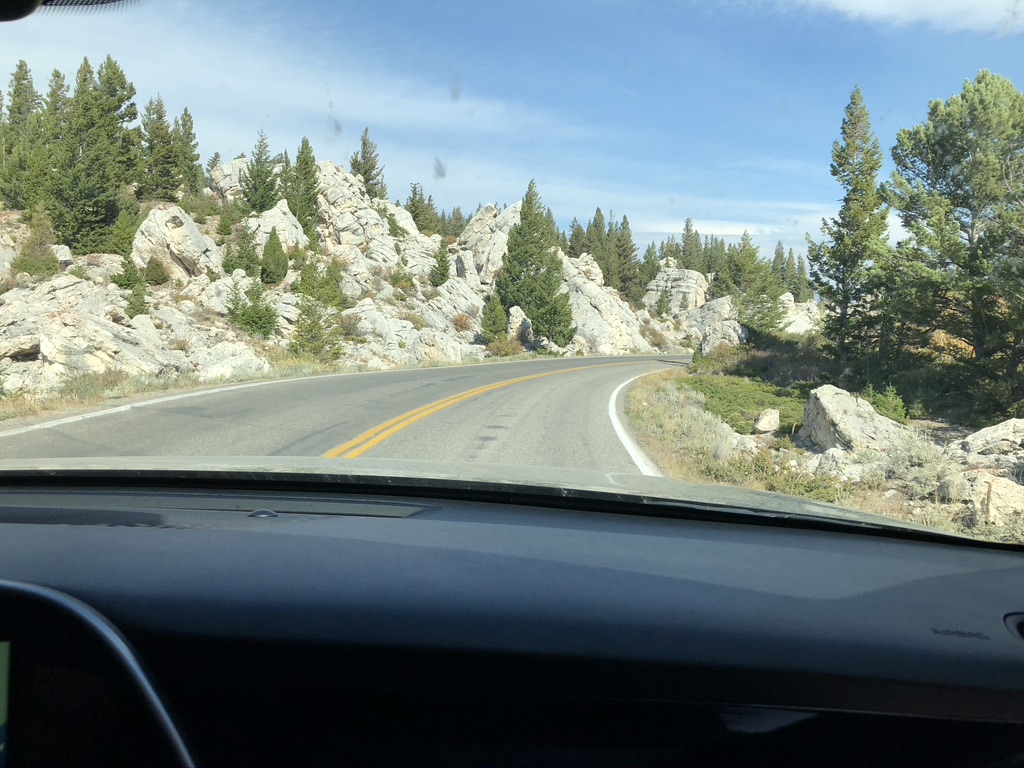 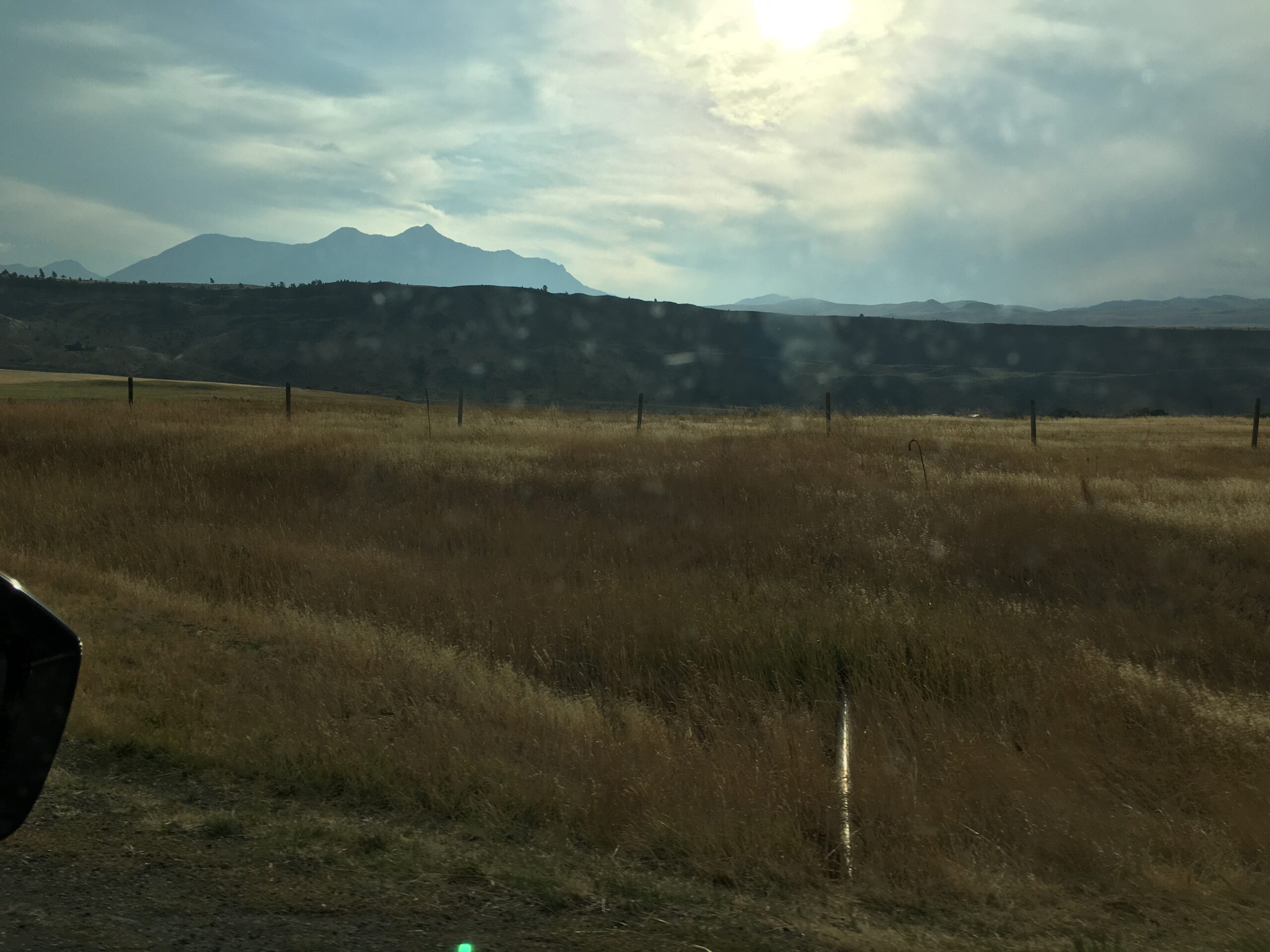