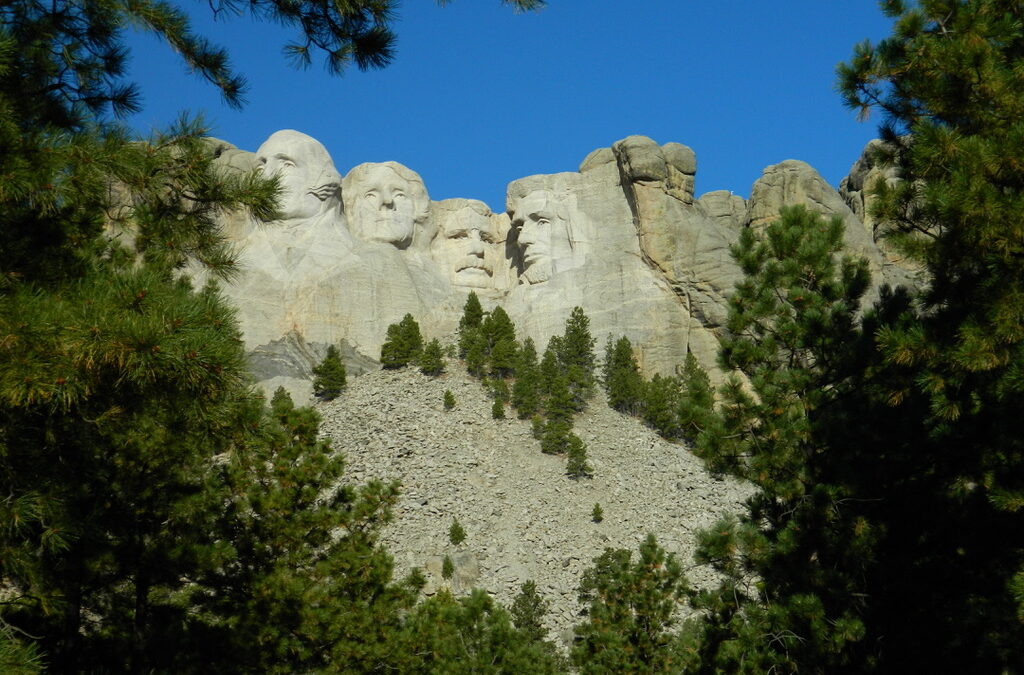 I have wanted to visit Mt. Rushmore for many, many years, but the opportunity never presented itself.  I was so excited that I woke up early; I mean really early.  I’m like a kid on Christmas morning.  Gene got up early as well and we walked to the local “Our Place Café” and had a great breakfast. He told me that he had looked up the park hours and they open at 5:00 a.m.  Perfect, we can get in and out before the crowds.  We arrived at Mt. Rushmore at 8:00 a.m. because we are just those people.  But the nice part was that there were only about 20 people in the park, so we could remove our masks, social distance, and take lots of photos.

The drive into the park was beautiful and we passed Crazy Horse on the way.  We planned to visit Rushmore then Crazy Horse then head back to the Bungalow.  In many ways, Mt. Rushmore was everything I had hoped for.  We walked to the original viewing platform and down to the sculptor’s studio along rough hewn granite steps.  There was a beautiful fireplace and tribute to Gutzon Borglum, the original sculptor.  It was fun to read the history and catch our breath for the climb out.  The elevation is over 5,000 feet, so you notice the climb on your way out. And there were a lot of stairs.  I disguised my fatigue by stopping now and then and taking photos of rock formations.  I don’t think Gene was fooled.  Some of the trails and the visitor center were closed, but it offered the park the opportunity to do some construction work.  If you have never visited Mt. Rushmore, you don’t need to budget a lot of time for the visit.  We were in and out in under an hour and that included the “original stair master” venture. I had thought there would be more trails to walk, but I do understand the Park protecting this great monument.  As we left Mt. Rushmore, we found a great pull out to take a profile shot of George Washington and a beautiful lake.

We left Rushmore and headed to Crazy Horse which is about a ten minute drive.  You can see the mountain and statue from the road, but we wanted a closer look and paid the entrance fee which seemed a little bit pricey.  The museum was open, so we did spend a fair amount of time there.  The scale of the sculpture is huge.  They are currently working on the arm and horse.  I was surprised to see that the sculpture has been “in progress” for 64 years.  The visitors center was quite nice and informative and offered a scale sculpture that was just beautiful. We enjoyed the sculptor  Korczak’s home and studio and many artifacts. You could pay an additional fee to get close to the base of the mountain, but we felt we could see enogh from the visitor’s center.

We headed back to Custer  for lunch and some retail therapy (purely for the grandkids sake!).  Gene did draw the line at going into the Claw, Antler & Hide store with the pickup filled with antlers and sculls parked in front.  I picked up some postcards and mailed to the Grandkids.  One still hasn’t arrived (and we have been home for two weeks), so I think they were sent via pony express.

Gene wanted to watch Monday night football, so we had an early dinner (Bison burger for Gene . . . again.) and spent the evening in our bungalow.  Tomorrow promises the Badlands. 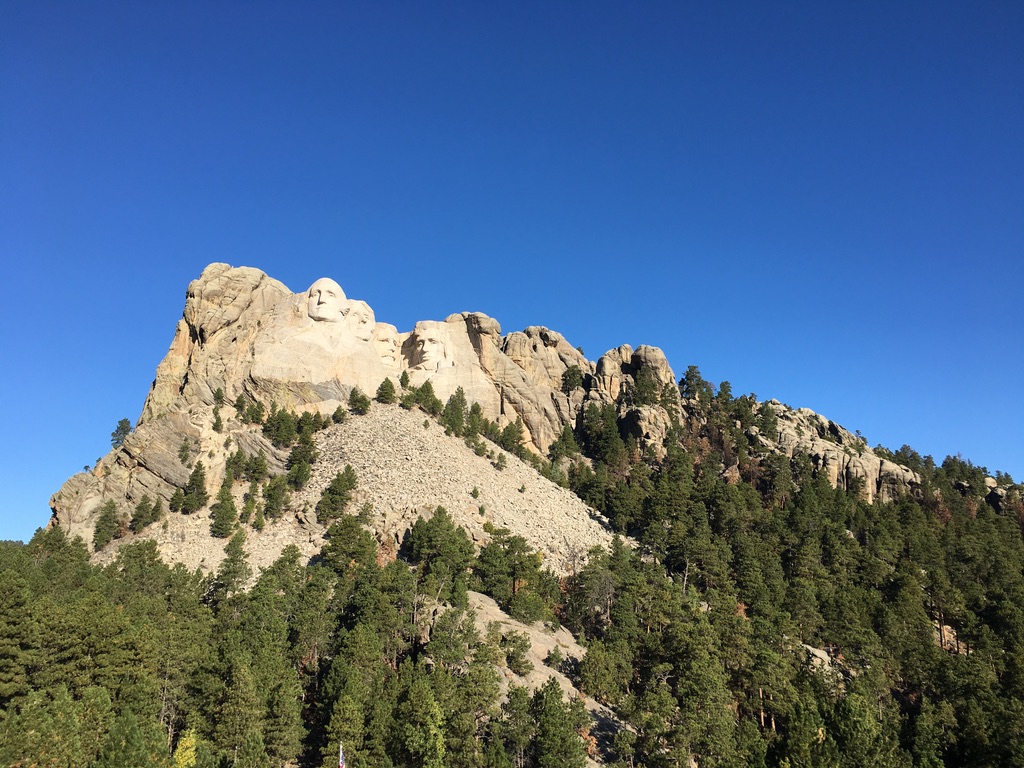 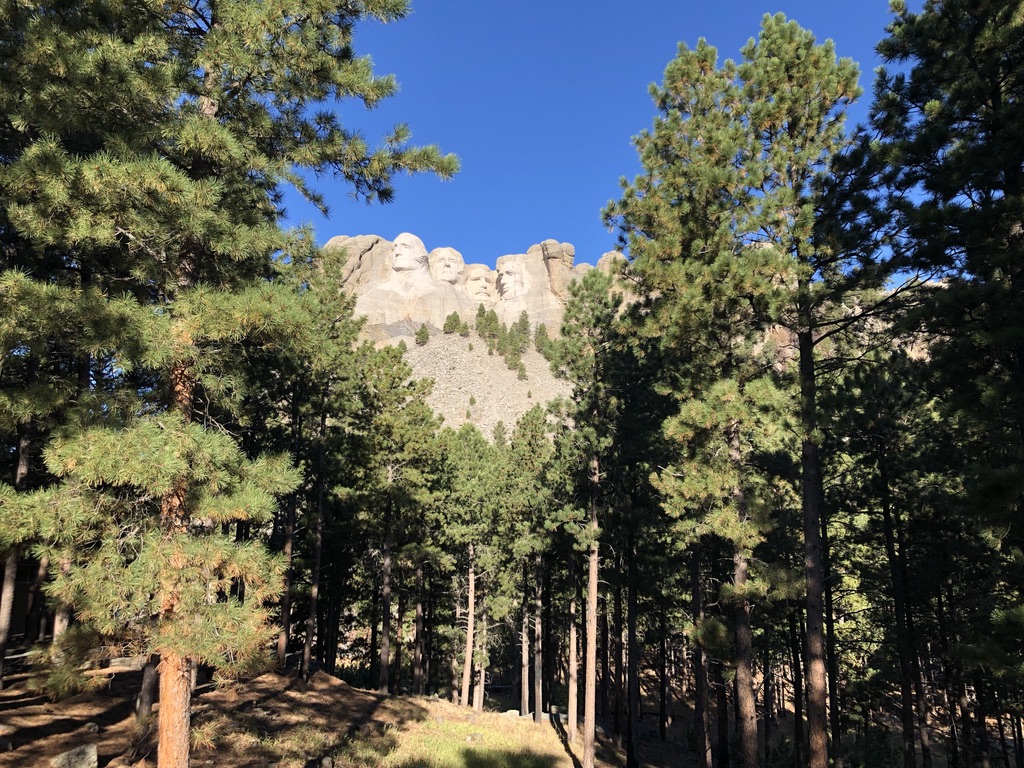 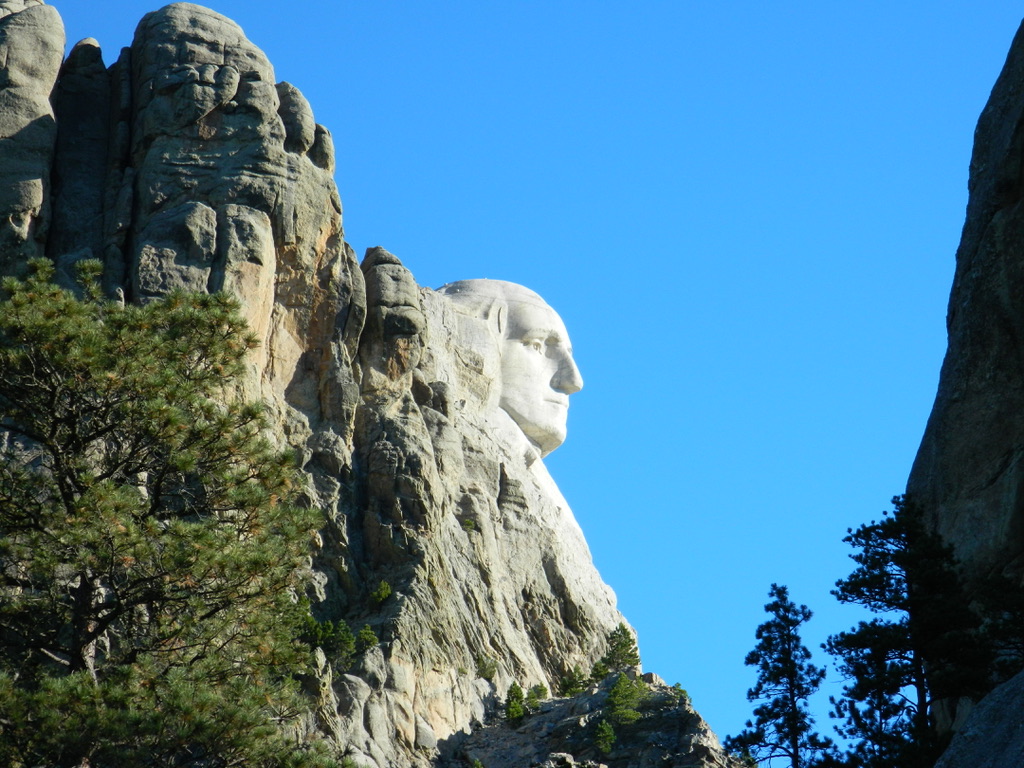 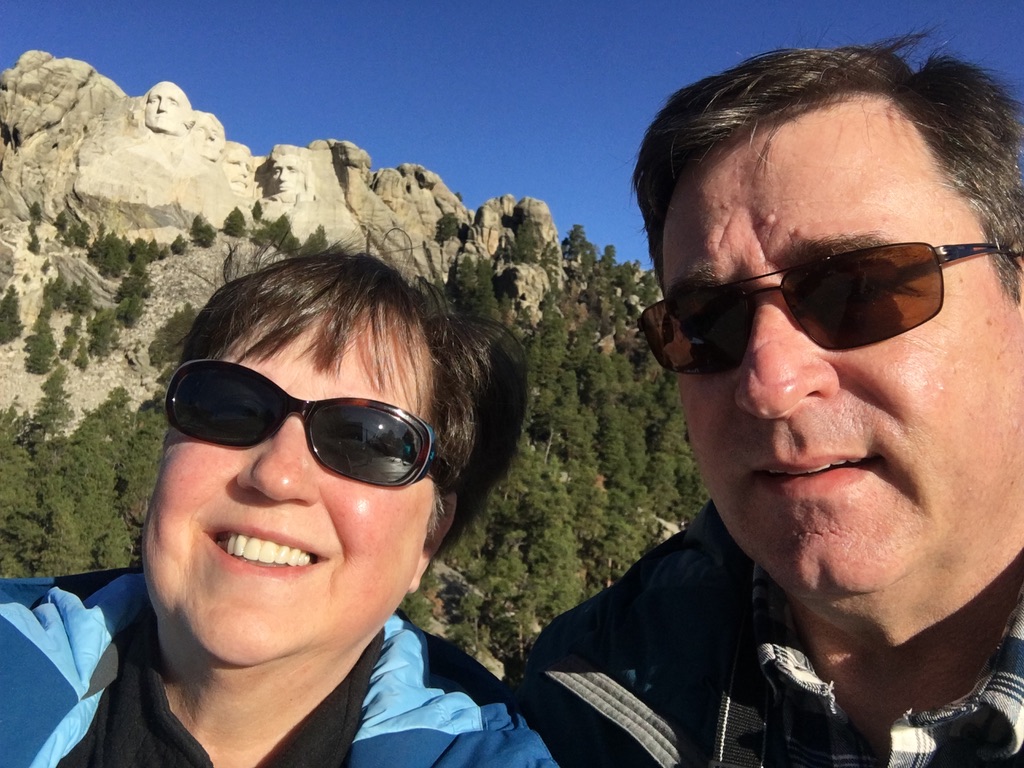 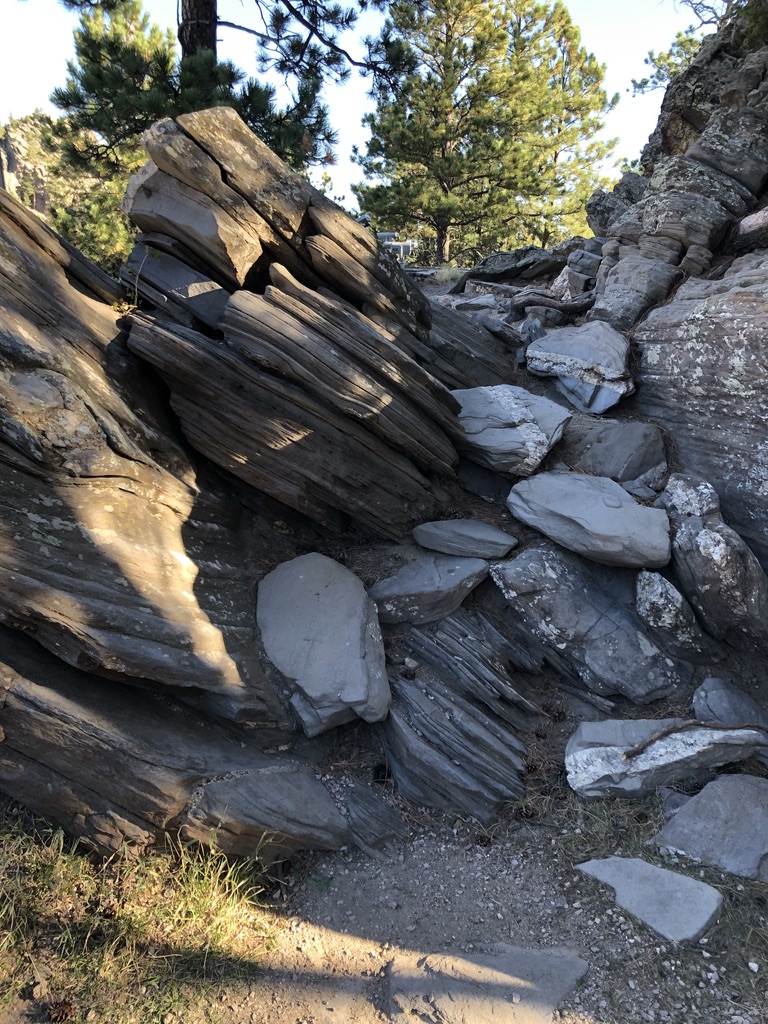 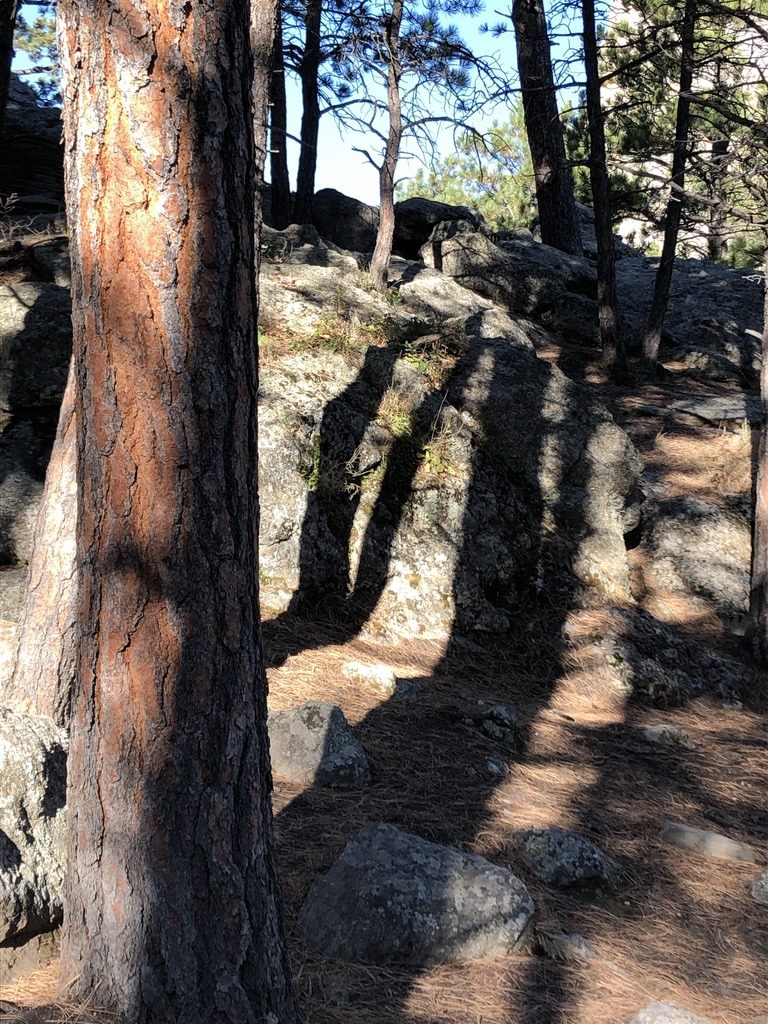 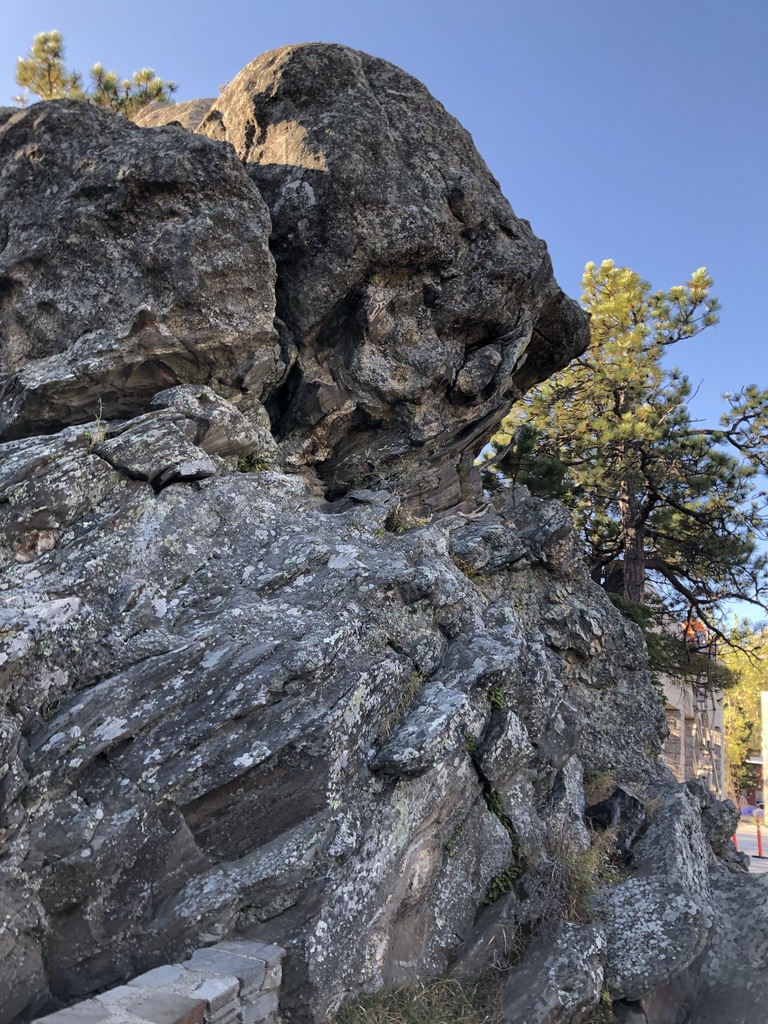 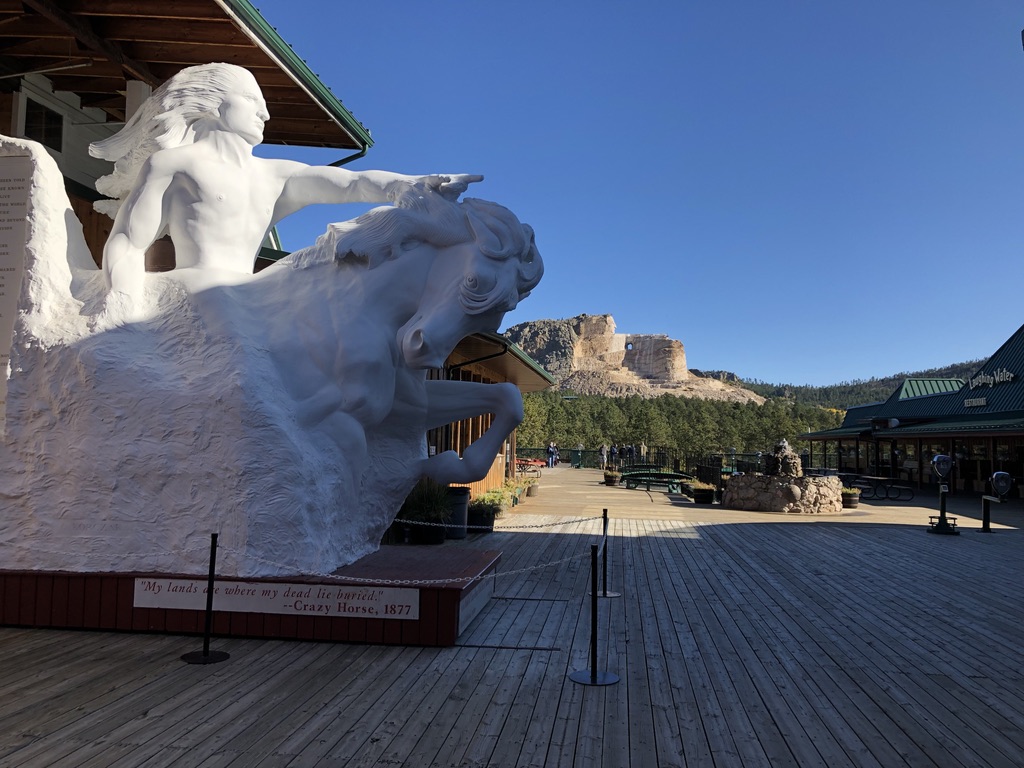 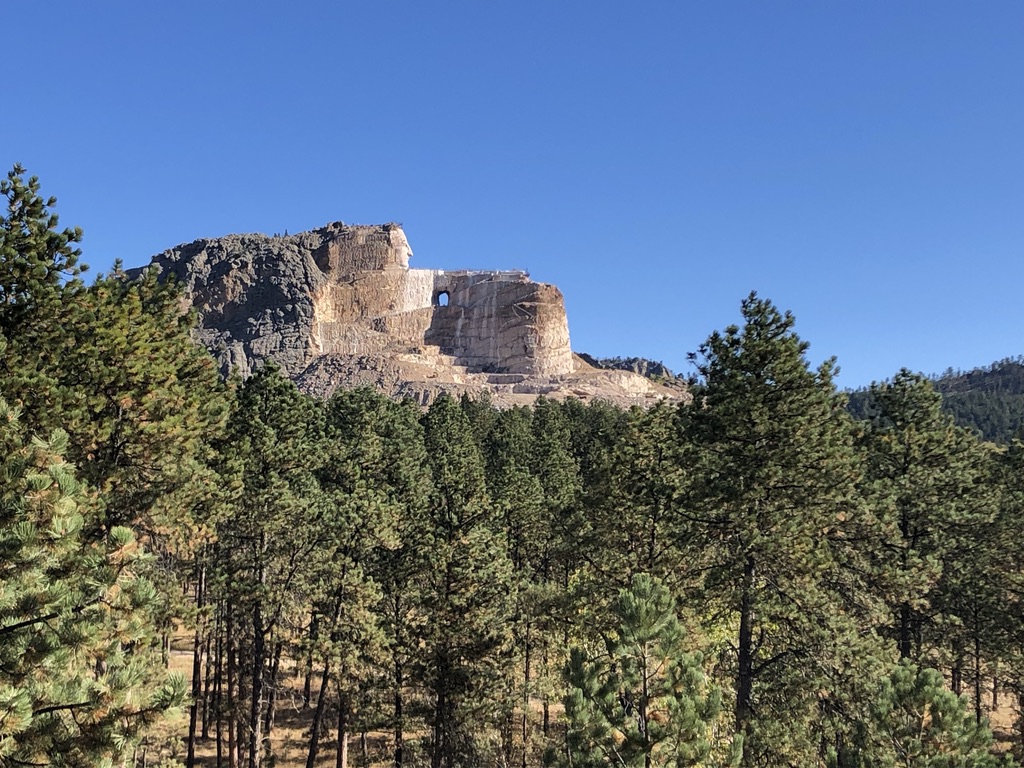 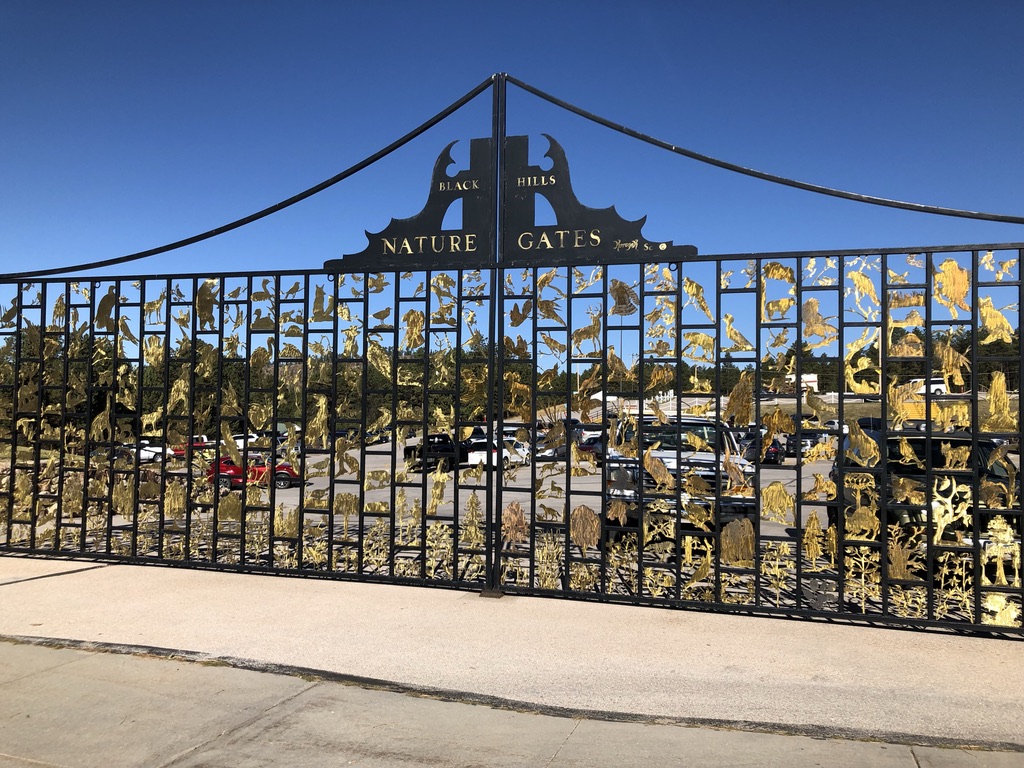 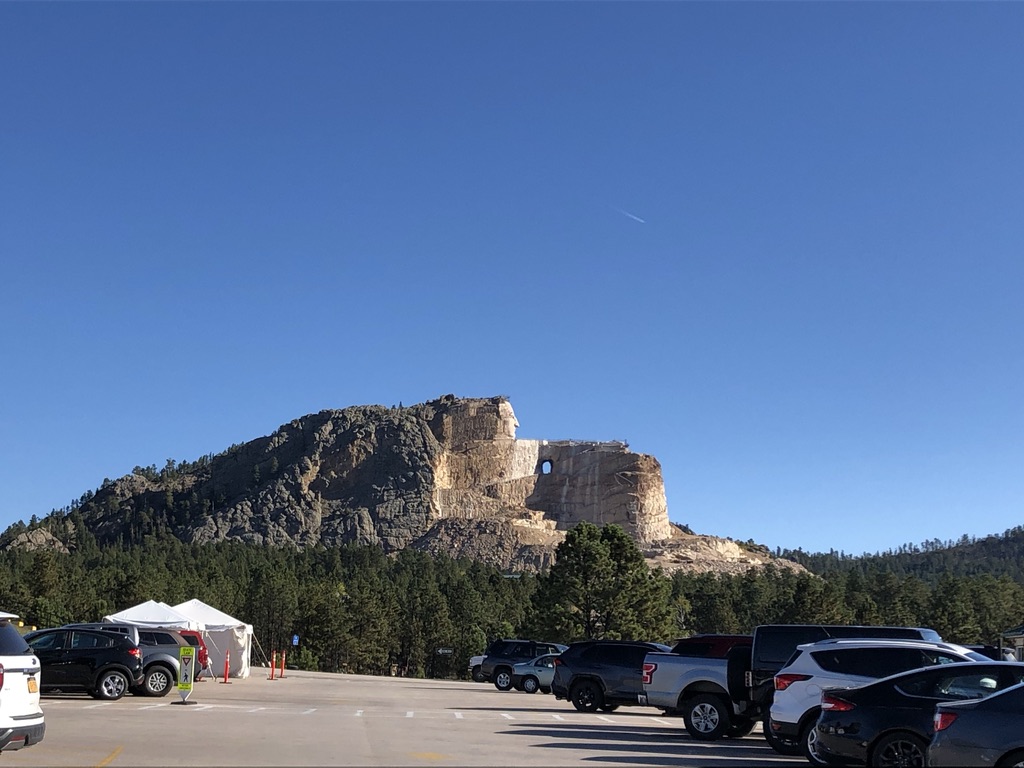 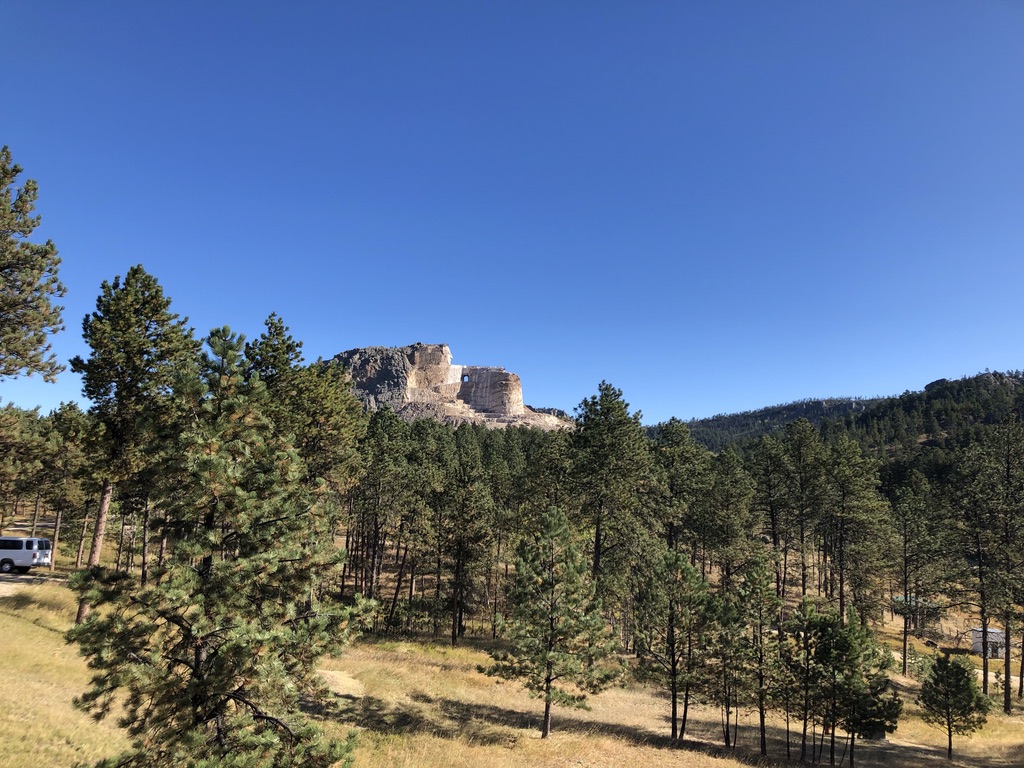 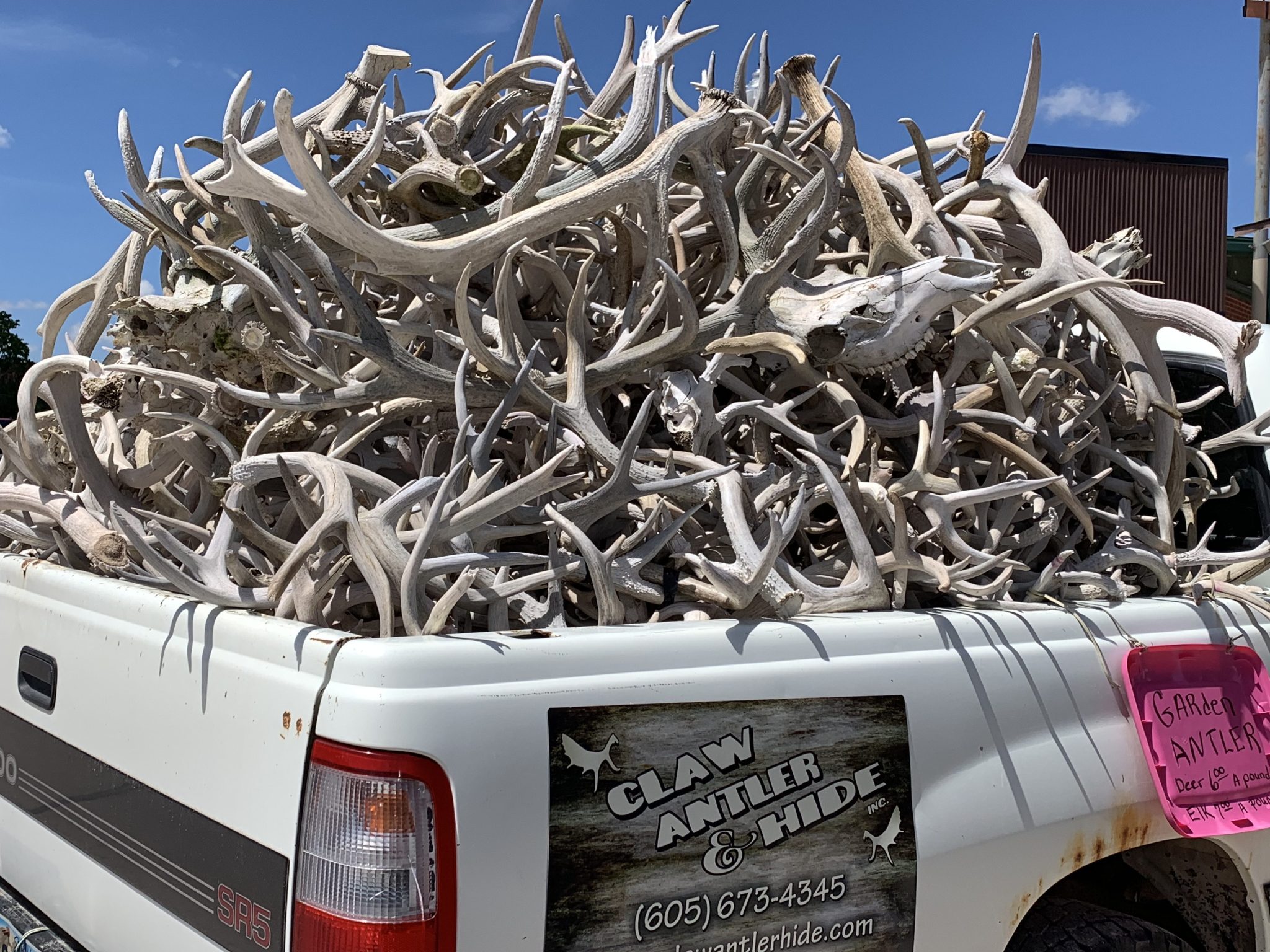 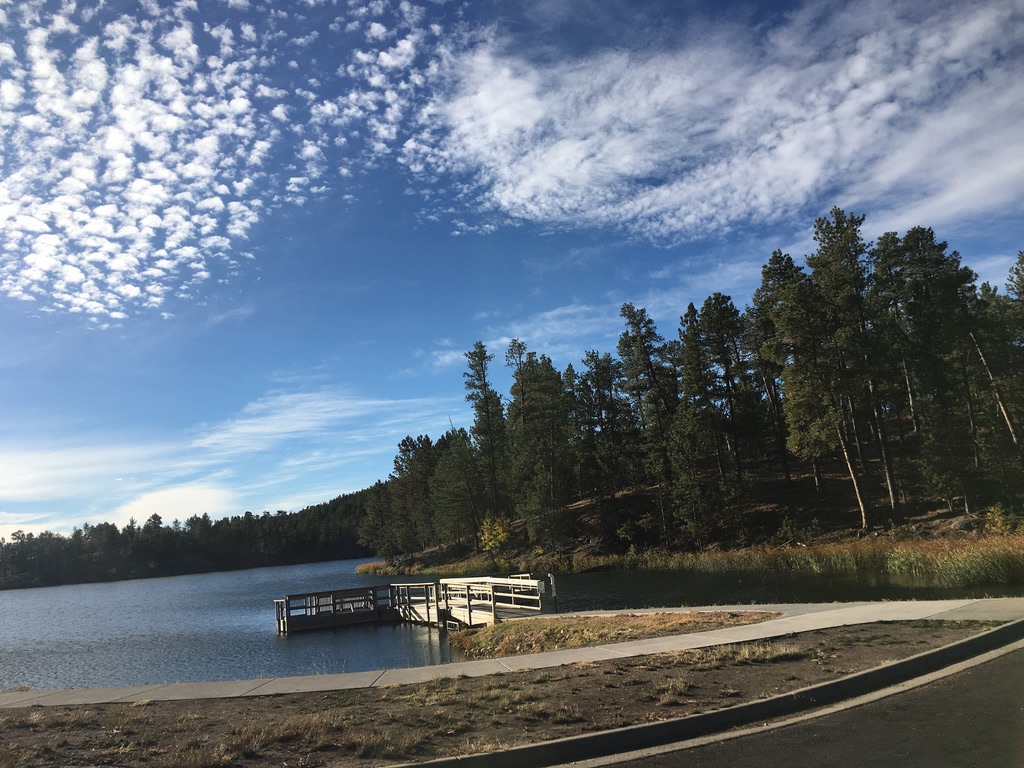