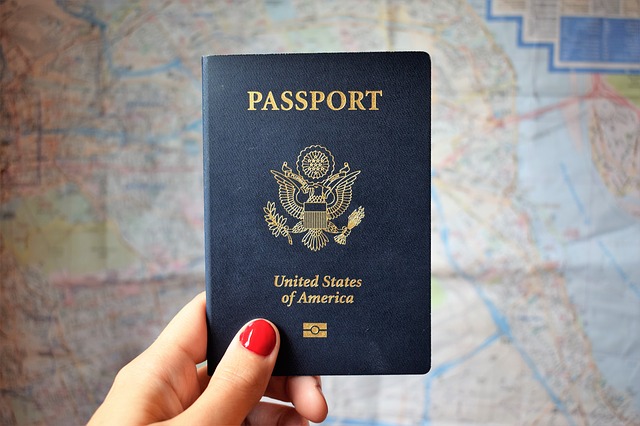 While international travel seems like just a vague memory now that we are in our second month of self isolation due to Covid-19, I know that we will be packing our bags and heading out to explore the world again in time.  Since I won’t be trying to clear customs anytime soon, and hopefully, Custom’s has a shorter memory than Homeland Security (long story, but they emailed me about one of my blog posts – seriously!) I thought I would share my difficulty in clearing customs. And yes, I can already hear Gene’s comment when he reads this, “I’m never traveling internationally with you again!”

While I had been to Mexico and Canada a couple of times, it was before Passports were required.  Once the rules changed, Gene and I had a trip to St. Thomas coming up and we decided to get passports.  I was so excited when we departed Cedar Rapids with my shiny new passport and had dreams of filling it with stamps from various countries.  I tried to show it to everyone I came in contact with at the airport. And truly, no one cared that I had a passport.

When we were departing St. Thomas, Border Patrol finally asked to see my passport.  I showed it with pride.  The nice gentleman then handed it back to me and waived me through.  “Wait,” I said, “Don’t I get a stamp?”  “We don’t do that anymore,” he replied. “But I have a new passport and I was looking forward to a stamp.” I say this (and possibly pout) as I feel a hand between my shoulder blades gently pushing me forward. I hear Border Patrol chuckling as Gene whispers, “Don’t hold up the line.”  He gets a snarky look from me.

We have a connecting flight in San Juan where we have to clear customs. The customs agent barely glances at my passport and luggage and waves us through.  Seriously, is anyone going to stamp my passport?

Our next big trip was to Japan to visit our son who was attending study abroad in Nagoya.  All my dreams came true as my passport got stamped, entry and exit forms were stapled to my passport, and the ambiguous question: “Do you have anything to declare?” to which I respond, “I have a big jar of peanut butter stuffed in my son’s dress shoes and two boxes of Kraft Mac and Cheese!” I know, what was I thinking? But the Customs sniffer dog had his head glued to my bag and I really hadn’t paid too much attention to the customs declaration form as I had been traveling for 22 hours. So I wanted to be on the safe side and declare my contraband.  Fortunately, Gene was in another line and wasn’t witness to me “holding up the line.” The custom’s guy laughed and waved me through.  And trust me, 6’2” Nicholas was not difficult to find in an airport in Japan.

Getting out of Japan was a bit confusing as we didn’t have Nicholas there to help us, but the people are friendly and I find that putting a confused and helpless look on my face is quite easy.  We spent the return flight spending all the Japanese currency on beer, which may have had something to do with my confession at U.S. Customs in Dallas.  “Do you have anything to declare?” asked the Customs agent.  To which I respond, “Are you kidding me?  We just returned from JAPAN!  I have two dozen sets of chopsticks (made in China) stuffed in my bag!”  Gene looked at me as if I had lost my mind.  He leaned over my shoulder and said, “Everything is on the form.”  Well, duh.  Now I remember the form.  Once again, I see an amused Custom’s Agent shake his head.  Not even once does he inspect and admire my stamp from Japan or my chopsticks.  He waves us through and Gene says, “You have to stop doing that . . . you are going to hold up the line.”

Our next international travel involved the entire family and I promised to be on good behavior.  As we headed through Border Patrol in Germany, I swear I heard someone in line behind me mumbling, “Don’t say anything, don’t say anything,” over and over.  A quick glance confirms that Gene is behind me.  Fine.  I will be good and just hand the man my passport.  But then he raised the stamp thingy and I perk up.  “I’m getting a stamp!” I shout.  I actually startle the poor man. It is 5 a.m. in Germany and I may have over emoted.  He gives me a stern look and waves me through. I now have a blurry stamp that says “ermannny”

I share these previous experiences to lead up to Aruba. Aruba was where all my past adventures and misbehaviors came back to haunt me. Gene and I decide to get to the airport early and we were glad we did.  It took three hours to get from the taxi to the gate. All because I got the “Special” boarding pass.  (Note:  when someone tells you that you have the “special” anything, beware.)  Checking in at Aruba is a series of getting in line, handing people your bag, boarding pass, and passport and them handing them back and pointing to the next line. We lost track of how many times we had to reclaim our bags and then turn them in again.

Things went pretty well until we got to our last line.  As I handed over my boarding pass and passport, the Border Patrol agent said, “You have a special boarding pass.  See these little marks here?”  I nod.  “I will need your passport and boarding pass and you need to step behind this line and stand next to the wall.  Don’t touch anything.” Gene gives me a look and I mouth, “I didn’t say ANYTHING!” I stand next to the wall like a criminal for the next 15 minutes while other passengers stare at me wondering what I said to the agent.  I glance at my watch and over at Gene (who I think is in line to get his passport stamped), and sigh.  I get a stern look from the agent. Seriously, how much trouble can I cause by looking at my watch?  And he has my passport and boarding pass, so it isn’t like I’m going anywhere. I’m tempted to look over my shoulder to see if there are marks on the wall like at the police station – not that I would personally know what the inside of a station looks like.

Finally, not one, but TWO agents come and confer with the first agent who hands them my passport and “Special” boarding pass.  They huddle and confer, then turn to me and say, “We need you to hand over your purse and come with us.  Don’t touch anything!”  Now people are really looking at me.  I shove my hands under my armpits in case I forget the “don’t touch anything” rule, and follow them.  They part the line like Moses parted the Red Sea while people stare and whisper. Then they put my purse through the scanner, and send me through the metal detector and guide me to a “special” room.

The “special” room is glass enclosed so I can see Gene’s quizzical and slightly worried expression, as well as about 100 worried passengers.  The agents are talking to me and I’m trying to decipher what they are saying as their accents are heavy and I’m hearing impaired.  I finally understand that this is a random check and they are going to pat me down.  A pat down must be a relative term because they were thorough, and they didn’t just pat.  I mean, my doctor doesn’t even go that far.  The agent eventually determines that I haven’t hidden any state secrets or anything else on my body; hands my purse, boarding pass, and passport back, and I swear to you says, “We hope to see you again soon.” I decide not to comment.

I walk out and whisper to Gene, “She owes me dinner AND a drink after that pat down!” So with one last hurdle, we approach the last Custom’s agent who had a front row seat to my pat down, and she asks: “Do you have anything to declare?” Nope, no way, am I responding to that, so I shake my head mutely.  Then she asks, “Have you spent more than $800 on anything while you were here.”  I don’t know, I can’t seem to help myself, so I respond, “Just on alcohol and I plan to double down when I get to the bar.”  She laughs, Gene laughs and she hands us our passports . . . forgetting to stamp them.  As we move around the corner, Gene says, “Good one.  You distracted her so much she forgot to stamp our passports.”  Are you kidding me!!!!