The Road to Hana 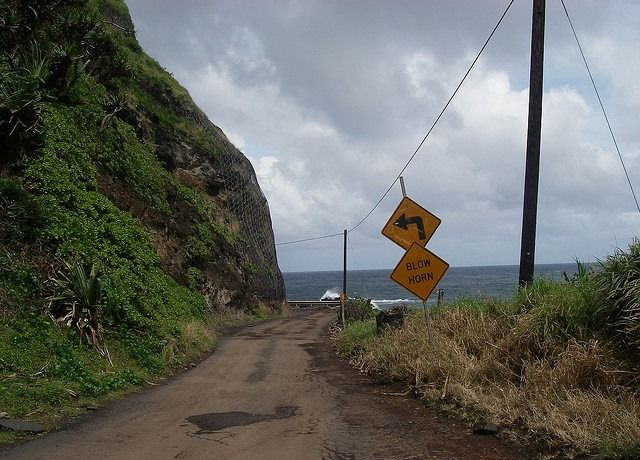 I think I will stick with my theme of travel stories this week, since we are all sheltering at home and dreaming of our next adventure. Once again, my travel enthusiasm got the better of us.

Several years ago, my husband and I traded the cold Iowa winter for a week in Maui.  It was our first time to travel to this beautiful island and I fully intended to make the most of it.  On our first full day there, Gene had to attend a medical conference.  I waited a respectable 30 seconds after he left the room to grab my swim suit and head to the infinity pool.  It was amazing.  The pool appearrf to drop off into the ocean.  I claimed my seat, ordered a drink, and started some serious daydreaming about moving to Maui and enjoying 80 degree weather every day.  (Around mid-January, I start thinking that four seasons in Iowa is highly over rated.  Give me some sun!)

About that time, I noticed a whales fin and tail slapping the water out in the bay.  I held my breath and watched in awe.  I had hoped to see a whale while I was there and could you believe it, one appeared just outside our hotel pool!  I looked around and wondered why others weren’t similarly awed.  I started pointing and telling anyone who would listen, “Look, there is a whale!”  A few people glanced up and smiled politely and I thought how sad it was that they weren’t taking in the beauty.  I tromp down the pool steps and swim to the edge so I could watch to my heart’s content.  It wasn’t until a few days later that I found out that February was the month that all the whales come to the bay and that there were literally thousands of them in the bay.  You would have to be blind NOT to see one.  It reminds me of how someone will say, “I saw a deer in your yard!” and I smile politely and think, “I hope it doesn’t eat another $200 worth of landscaping!”

I don’t want you to think this country girl spent all of her time in Maui at the pool.  I was determined to scout out the entire island and have some adventure while I was there.  While reading the tour books, we found mention about the breathtaking views along the road to Hana that should not be missed.  The road is described as follows:

“The world famous road to Hana is a gorgeous, winding coastal drive through breathtaking valleys, beautiful beaches, lush rain forests, spectacular waterfalls, desert-like landscape, and remarkable cliffs.  This will be one of the most unforgettable journeys of your life (They should underline that part!) with beautiful photo opportunities.”  The brochure goes on and on to describe the 617 curves and 54 one-lane bridges. I was not going to miss this once in a lifetime adventure, so I signed us up for the full day tour.

What the brochure doesn’t tell you is that your vehicle will be hugging the edge of the road as you travel by the remarkable cliffs. Your teeth and kidneys will be jarred from all the bumps on the unpaved portion in the “untouched” southern side of the island where rental car contracts expressly state, “Travel at your own risk.  We won’t come get you, and the tow truck will ask for the deed to your home to come get you.”

Gene and I were the youngest passengers on the tour, so we graciously took the back seat of the 12 passenger van. We were sitting directly above the axle, so every time we hit a bump, we were thrown into the air (just like riding in a school bus). At the start of the trip, Gene tried to be a gentleman and keep one arm around me so I wouldn’t be tossed around. But well into the trip, self-preservation kicked in and he was holding onto the back of the seat and the roof, and I was on my own.

Our driver, a local, wanted to give us the full immersion experience, so every time he passed a fruit stand, he would: pull over, grab a piece of fruit, wave at the vendor, climb into the van, pull out his pocket knife and pass it and the fruit around telling us we “just had to try it.” I have a healthy respect for hand washing and there was no way I was going to eat something cut with a stranger’s pocket knife and passed through a van load of people. At one point, a passenger in front of us turned to his wife and said, “Am I worried?  Why should I be worried?  Our driver is a kleptomaniac who makes up facts at every turn and then reassures us by saying Don’t worry, I know this road like the back of my hand!”  I’m not catholic, but when people started crossing themselves, I started thinking that maybe this adventure wasn’t such a good idea.

As the day progressed, and due to the frequent fruit stand stops, we were hopelessly behind schedule, so our van driver began to pick up speed. “We don’t want to be on this road after dark,” he warns. We were all in agreement, but picking up speed resulted in Gene and I being tossed around helplessly in the back of the van. Other passengers were shouting, “Are you guys okay back there?” I couldn’t reply because I was saving all my oxygen to either tell Gene I loved him and I was sorry, OR . . . for my final scream if we went over the edge. You have never seen such grateful passengers as Gene and I were delivered to our hotel, well after our dinner reservation time. We stumbled out of the van and just nodded and waved when the driver said he hoped that we had a memorable trip. Dinner no longer held any appeal but we did hit the bar . . . hard, when we got back.

We have a lot of memories of that trip and have returned to Hawaii a number of times . . . but we have never even considered another tour of the Road to Hana!