MacGyver (Without the Paperclip)

As I was spent my two hours in the hyperbaric chamber today, I wondered what MacGyver would do in my situation? If you remember the MacGyver television series, whenever MacGyver was stuck in a situation, he would take a paperclip, a lost penny, and the band aid off his thumb and build a lunar module to drive him to the nearest town. I am certain that he would never have spent two hours in the HBO (Hyperbaric Oxygen) chamber waiting for someone to open the door for him. 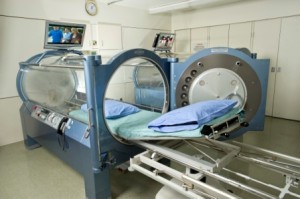 I looked around the chamber and at my two designated toys — the water bottle and oxygen mask –and plotted my escape. What would MacGyver do? The oxygen mask has a small cushion that has been filled with water so it won’t explode under pressure. This might work as a life preserver for a hamster in a real life dive, but it would probably just be messy if I tried to remove it. The hose that connects the mask to the room oxygen outlet on the door shows some real potential, but it is barely long enough to wrap around my neck, and I’m saving that for when I really can’t stand it anymore. There appears to be some sort of paper or fibrous filter in the oxygen mask, and I pause briefly to wonder if it is flammable and if so, how it got by the safety police that practically frisk me (and check crevices!) before I go in for a dive. And as I have mentioned in the past, I’m saving the water bottle as my emergency fire extinguisher, so I’m not sacrificing it.

I am left with two blankets, a sheet and a hard pillow. I could unravel the blankets and tear the sheets into strips and form some sort of rope, but I just can’t come up with how that would be helpful. The pillow has intrigued me from the start. I just can’t figure out what it is made of that wouldn’t be flammable so that it is safe to go in with me. It isn’t feathers, and it isn’t air, but I don’t know what is inside. Just for kicks today, I wiggled and fidgeted and slid to the side and was able to get the pillow out from behind my head and onto my stomach. When the nurse looked up, I pretended to be engrossed in the movie. With my eyes glued to the television, I gently poked and prodded the pillow to see if I could find any use for it.

Unfortunately, I still don’t know what it is made of, and I had to spend the rest of my dive with no pillow under my head. I ended up sliding it down to my feet and just pretended that was my plan from the start. Oh, if I only had a paperclip!