My sister and brother-in-law came to visit and supposedly to celebrate the end of reconstruction. Personally, I think they just wanted to blow some things up. After three surgeries, 12 weeks of restrictions, seven JP drains, and enough scars to form a patchwork quilt, I was finally done with reconstruction and I wanted to go out with a big bang. We picked a beautiful fall day to celebrate the finish line. With tannerite, breast forms and weapons in hand, we went out to a field to cause some carnage.

After gathering all of my temporary breast forms, we had a serious discussion on how we were going to blow them up. The guys were trying to be tactful and respectful, but my sister and I were having none of it. My first idea was to get a piece of cardboard and to glue all the forms on it creating one, giant boob. I even planned to paint the center form red to make a nipple. But logistics and gravity were against me, so onto plan B. Gene came up with the idea of putting the forms in a giant, clear Pork Rind container. Oddly enough, you can’t buy such large containers of pork rinds in Iowa ( the pork state), but have to import them from Texas.   There was something funny about stuffing faux boobs into a pork rind container. 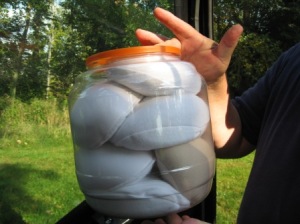 At this point, there was a lengthy discussion about process and what gun to use. We let the boys work it out. 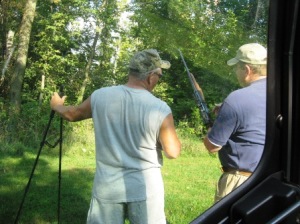 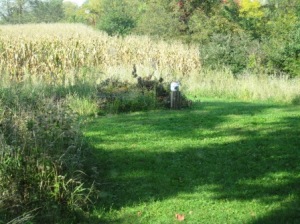 Gene placed the container on a stump and we all put our ear plugs in. Tammy and I got our cameras ready and prepared to document the explosion. Gene took one shot and , boom! Breast forms and the lid when flying as we all held our sides and laughed. 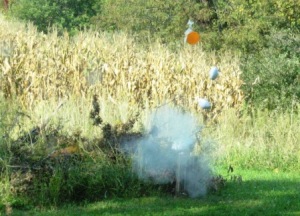 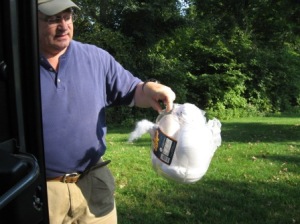 We finished off the day by blowing up pumpkins which have become symbolic of my progress. So many people have asked, “Why are you blowing up pumpkins?” I have two responses to that question. First of all, because it is fun! You can’t help but laugh when a pumpkin explodes and flies everywhere. And the other reason is that I needed something to mark the progress through each stage of this journey called breast cancer. I also knew that whatever symbol I used, I wanted it to be funny. 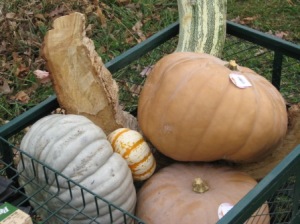 I think that my dream finale would have been to have a pumplin patch drop a truck full of pumpkins at the house and have all my friends bring lawn chairs and sit and cheer as we blew them up in one big explosion. Maybe we will save this for my three year anniversary!