My son, Steven, flew in to stay with me for ten days following my great escape from the hospital. He was in charge of my pain medications and driving me to and from hyperbaric treatments and doctors appointments. Since I was restricted from using both arms, he was literally my care taker until Gene could get home from work.

The first week that I was home, I was on round the clock pain medications. In my drug induced haze, it would have been easy to make a mistake and take too many pain pills. So Danielle wrote up a schedule on a white board for Steven to follow in drugging poor ole mom. How many chances in a lifetime do you get that opportunity? I remember Steven’s and my eyes growing large as Danielle wrote out the schedule. It seemed very complicated and we both worried we wouldn’t be able to follow the chart. As the days past, the chart became invaluable. It was our roadmap for the day and Gene was in charge of night time medications — he didn’t need a chart.  Below is a photo of my schedule.  (I have deleted the medication name as it isn’t important and every patient needs to follow their own doctor’s orders. —  Don’t you just hate disclaimers!) 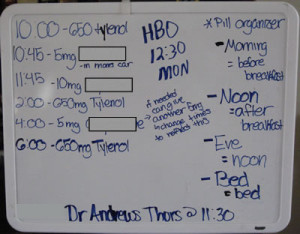 Danielle’s nursing skills came in handy as she prepared a schedule for us to follow.

The second item that was necessary for survival during Steven’s stay was the “travel bag.” This bag included a couple of bottles of water, my pain medication, a movie to watch during hyperbaric treatment, a package of cheese crackers to eat either on the way to or from treatment (HBO treatments increase your metabolism and you need to eat before and/or after), and a laptop for Steven to entertain himself.

Steven would always be standing at the door with a wheel chair, a bottle of water, and some pain medication following my two hour HBO treatments. He knew that I would be hurting after laying on my back and moving onto the gurney. He was so considerate to make sure I could get some pain relief as soon as possible.

We had been traveling to and from town for about eight days when I glanced over to see Steven digging in the travel bag for my bottle of water. As he dug around, I saw a pair of my underwear peak out of the bag. That seemed odd. I didn’t remember putting a pair of underwear in the bag, and I was certain it wasn’t Steven’s idea. Then it hit me that this was the same bag that I had packed to take to the hospital. Since I was going to be there for a couple of days, I had packed a pretty, new pair of pajamas and a pair of underwear. Apparently, I had forgotten to take the underwear out when we changed the bag to our travel bag.

So for a week, Steven had been fishing through the bag and hadn’t mentioned or questioned the underwear. I just could not resist. I looked at him and said, “You never know when you are going to need an emergency pair of underwear.” He didn’t even blink before responding, “Isn’t that the truth!” It hurt so badly to laugh, but it was worth it.  A 27 year old man should not have to see his Mom’s emergency underwear.

I finished HBO treatments on Tuesday and the nurses gave me a cup cake and told me that they would miss my smile and my sense of humor. They took excellent care of me while I was diving, but I was a little disappointed. I was hoping for a certificate that said I was a “Certified Divemaster.” How many people do you know who have done 30 dives?