How to Kill a Watermelon 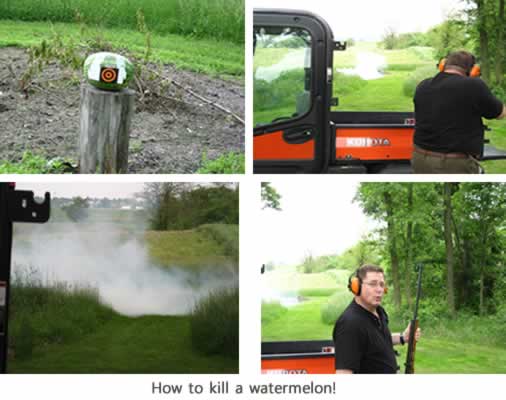 As I left radiation on my last day, I stopped at the grocery store to pick up a few things. Just inside the door was a large stand of ripe watermelons. Hmmm, I think. Wouldn’t that be fun to blow up? So I grab one (and two more just for the fun of it) and put them in my cart. I feel frustration management therapy in my future. The water melons roll from side to side in the back of my SUV as I make the 30 mile trip home, but I laugh each time they thunk on the side of the car. Fingers crossed that they don’t split and leak sticky juice all over my vehicle. When I get home, I line them up on the bench next to the door in the garage.

When Gene gets home, he walks in and says, “I take it we are going to blow up some more stuff to celebrate the end of radiation.” You can’t get much past this man that I have been married to for 30 years! He is a good sport and stops in town to purchase the Tannerite. What did we do for entertainment before my Brother-in-law turned us onto this stuff?

As I have mentioned in the past, I’m not a fan of shooting, but I get such a kick out of watching something blow up. In addition, my right shoulder is very sore and oozing from the radiation burns. The thought of having a rifle hit it is unbearable. Fortunately, Gene is willing to take one for the team. We hear a neighbor target practicing in the woods. I joke that I bet we can make more noise than they make. Gene lines up his shot and BOOM! There is a flash and watermelon debris, juice and smoke go everywhere. I can barely hold the camera still because I’m laughing so hard. There is total silence from the neighbor, and Gene and I laugh harder. I love this man!