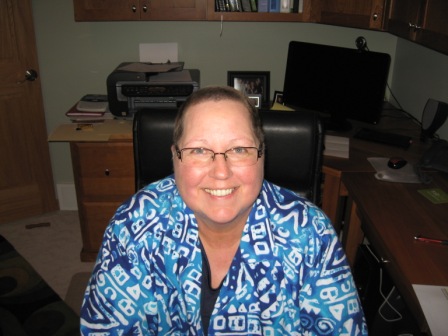 Seventeen weeks since I stopped Phase II and the chemo that makes your hair fall out. Can you believe it?  When I had the last chemo on March 31st, my Mom asked me how long it would take for my hair to grow back.  I told her that I wouldn’t need my first haircut until August.  Frankly, I just made that up.  I really believed that I would need a cut sooner than that, but it would take until August for it to thicken up.  Well, the joke is on me!  I still don’t need a trim, but I will say that my hair is as thick as it ever was.  I’m lucky that way.  The swirl pattern continues and from the back it looks like I walked into a tornado.  I suspect that my hair will be curly for a while.  I’m okay with that.  I have always had heavy, straight, thick hair, so some curl would be an interesting change.  I find that getting my hair back isn’t as big of a deal as I thought it would be.  I have gotten use to being bald, and it is entertaining to watch people as they try to decide if I’m a cancer survivor or if my hair style is a personal choice.  Ha!